Showing posts from March, 2012
Show all

And to Think that It Happened with an Indigo Vat! 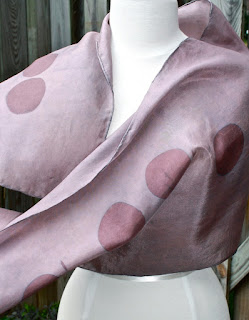 With apologies to Dr. Seuss...   Well, not JUST an indigo vat. These scarves were dipped (how many times for each, I don't know) in an indigo vat and left to oxidize for several days. Next I immersed them both in a vat of Quebracho red with walnut dye solution added as an afterthought. I was just playing -- who knows how long or how much of each quantity I added! Finally, I clamped on some circular disks to create a shibori resist and then immersed each scarf in a discharge vat. I used thiox to discharge the color -- which is the same ingredient used in my indigo bath to reduce the oxygen. Hence the unusual colors, because the thiox reactivated the indigo, creating wonderful and definitely unpredictable colors. If anyone reading this knows more about why this happened, I would love to hear from you! I've had this happen before, where a discharge bath can reactivate the indigo color. I also know that an indigo bath can act as a discharge vat for other colors. For the
Post a Comment
Click here to see photos and read more.... 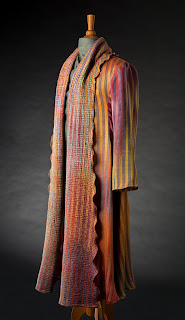 This coat was just juried into the fashion show for Convergence 2012, the biennial international conference sponsored by the Handweavers' Guild of America. This year's show and exhibit takes place in July in Long Beach, California. My entry is titled "Sunrise Sunset Coat," marking the many changes this winter in the lives of the people I love. It's dedicated to my father who turned 88 in January and is now in long-term care at a wonderful nursing home, Penfield Place, in Penfield, New York. The coat is woven on a warp of 60/2 silk, hand-dyed in two alternating color ways, which you can see in the stripes. I used two different wefts: one of hand-dyed 60/2 silk (on the right side of the photo above) woven in stripes of 3/1 and 1/3 twill and the other of Habotai silk ribbon and handspun merino (on the left in the photo) dyed a deep burgundy and woven in plain weave. I love the way the warp flows every which way in the plain-weave fabric, which resembles a rag
Post a Comment
Click here to see photos and read more....

Last Saturday at the Weaving and Fiber Arts Center, I taught a class on "Getting the Blues: Natural Dyeing with Indigo and Woad." The short story is that, among some 275 plants that have usable amounts of indigo in their leaves, woad and indigo are the most popular worldwide, indigo itself ( indigofera tinctoria ) being the most popular natural blue dye of all time. Both have been used for thousands of years (woad, for example, was used in the British Isles by the Picts to paint themselves blue during warfare). The textile industry in southern France, centered in Toulouse, was devoted to woad -- until the 16th century, when indigo was introduced from Asia and, literally, blew it out of the water! (OK, so I can't resist a bad pun.) Indigo has the most concentrated levels of the blue pigment, which is why it's preeminent among its competitors. So I thought we'd have a class to demonstrate why. The photos below give you some of the results. (There are several quali
3 comments
Click here to see photos and read more....
More posts