I think it's Elvis Costello who said, "Writing about music is like dancing about architecture."

You could say the same about weaving. Writing about weaving is like... painting about cooking. He's making two contradictory points at once, to my thinking: first, that it makes no sense to try to verbalize what is going on -- and second, on the other hand, you may be doing something interesting in the attempt!

"A weft-faced pattern weave with two or more sets of complementary wefts. Even warp ends separate the weft sets so that one set (color) is on the surface of the cloth and the other(s) on the back. Odd warp ends bind the complementary wefts in alternate (tabby) order, thus the name weft-faced compound tabby, also called taqueté and summer and winter polychrome...."

from A Pocket Dictionary of Weaving Terms for Today's Weavers, by Madelyn van der Hoogt, copyright 1989

In grappling with definitions and drawdowns and actual fabric, I decided to go back to basics, which would be a simple 4-harness threading. It gets clearer and clearer the closer you look. Here's a drawdown for Turned Taqueté, below, threaded on a straight draw with two pattern blocks in the treadling.

Treadles 1 and 2 are the plain weave or tie-down picks, while 3 and 4 are the pattern picks. If you look at the tie-down picks (just by looking at the first treadling block on the upper right-hand corner of the draft), you'll see that the weft is tied down alternately by brown warps on harnesses 2 and 4. That's the tabby in this compound structure. At the same time, warps on harnesses 3 and 1 -- the pattern warps -- are lifted over 3 picks. Back and forth and back and forth, which is pretty much what we weavers do ;o)

So, as Madelyn says, one warp thread floats over 3 picks and the warp thread next to it floats under 3 picks. (This happens alternately, with picks in between, of course, so that the warp floats are not parallel with each other.) But this basic fact is, really, the beauty of Turned Taqueté: you have a pattern on both sides of the cloth, because the structure is warp-emphasis on both sides of the cloth.

Here's another way of looking at it. Since Taqueté (this time, not turned Taqueté, but the original structure, which is weft-emphasis) resembles Summer and Winter, let's compare the two at their simplest level, on 4 shafts. 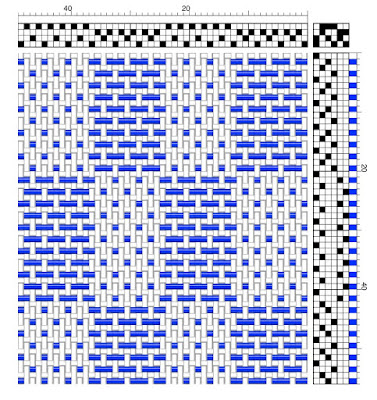 Above, a simple Summer and Winter pattern using two colors in the weft. You will see that there are weft floats (in blue, floating over 3 warps) and warp floats (in white, floating over 3 picks), with the weft colors defining the pattern. Treadles 1 and 2 weave tabby (so that warp threads on harnesses 1 and 2 are on opposite sheds). Threads on harnesses 3 and 4 are the pattern warps, with two blocks in the treadling to alternate the pattern. If you turn the piece over, you would see the pattern in reverse. 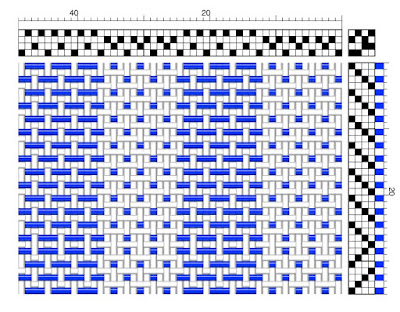 Now, below, we turn the draft: Threading becomes treadling and vice versa. The tieup changes and the tie-down picks are now on treadles 1 and 2. The structure is the same -- except that we have turned the fabric 90 degrees and weft floats are now warp floats. 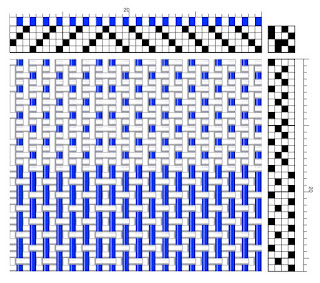 This is only a beginning -- and a wordy one at that! Still, it helps me immensely to understand what is going on. My aim is to design more complex patterns that maximize the potential of this structure, because it allows for showing off colors and patterns.

Thanks for reading, and thanks so much to Betz Frederick in Phoenix, Arizona, who has asked all the right questions and contributed so much to my own understanding! Here, for your viewing pleasure, is a photo of a scarf she recently completed, a network-drafted Turned Taqueté pattern using two painted warps in an extended parallel threading. 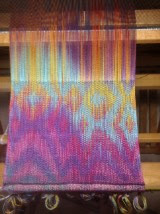 Thank you for this!

Thank you for this clearly written concise explanation!

I love your blog - so informative and inspiring.

But I still do not understand turned taquete - I thought it was a block weave, but the turned example you give has just a straight draw in the warp, and you show weft blocks through your draft's treadling (or do I have this wrong?).

I have been studying 8 - 16 shaft turned taquete, but I still cannot figure out its basic block structure. I'm hoping you are willing to help!

With Turned Taquete, do you typically use a thinner thread for the tabby or the same weight as the warp?

Thanks for sharing your beautiful work and inspiration
Janene

Iris, thanks for your kind words. Because Turned Taqueté (nowadays better known as Jin) is a warp-emphasis structure, I use a weft that is about half the grist of the warp. That way, the pattern is clearer.