Mary, Untier of Knots: The Sacred Business of Unravelling Yarn 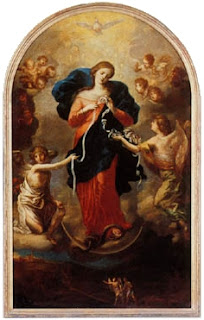 Many times, when I was slowly and frustratingly trying to unwind a skein, working to untie knots that some creature (usually my boxer, Bruno) had playfully created, or just unworking some twists that mysteriously appeared as I dragged some yarn around -- I often thought of this metaphor: that untying knots has something to do with the larger issue of unraveling problems.
You move slowly, you open the fibers, you don't pull things tighter, you don't yank on the threads in hopes that they will behave -- you kind of find out how they need to work to untangle themselves. And then, one day, I came upon this painting of Saint Mary, Untier of Knots! It was painted around 1700 by Johann Georg Melchior Schmidtner.
I realized that this endeavor was, in some way, a spiritual activity. I love this painting, because I think that so many of us fiber lovers have spent an inordinate amount of time untangling skeins, wondering why we are so crazy to waste so much time trying to save our precious yarn. So here she is, pursuing a hallowed activity.