Beaming (a Warp) with Pride 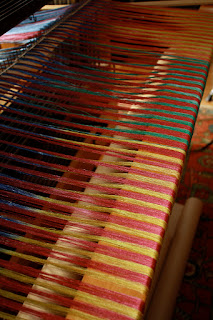 Today has been a good day: My loom is finally warped. It's a 12-yard warp, 1900-plus ends total, of 60/2 silk. It's actually two warps, since I painted 12 bouts in two different color ways and then beamed them all together to create alternating stripes. (An homage to the late Estelle Carlson, who gave a workshop to our guild on a similar technique.)
The tale is best told in pictures.
Winding the warp, with a cross at both ends: 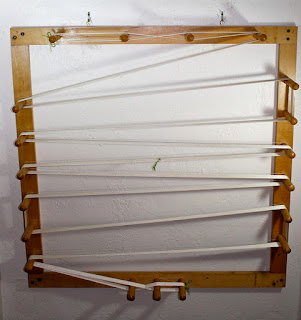 I wound 12 warp bouts, about 160 threads each, so that the dyeing would go smoothly and the yarns were less likely to get tangled. (Emphasis on LESS likely.)
Next came the painting: 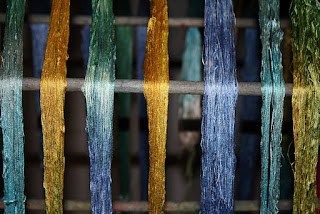 I wanted to paint two contrasting and simultaneously harmonizing color ways, inspired by the image of a Soleri bell that hangs in the Japanese maple tree in our garden. One color way moves from turquoise to teal to periwinkle to gold (the bronze bell, with a verdigris patina); the other travels from purple to burgundy to copper to olive to gold (like the autumn leaves on the Japanese maple). I want to see these colors play against each other, juxtaposed in narrow stripes on a fabric.
Next came beaming the warp, the biggest challenge of all. If it isn't beamed right, it won't weave right. And this is a very, very fussy warp.
So now it's all "on the beam," as they say. The view from the front: 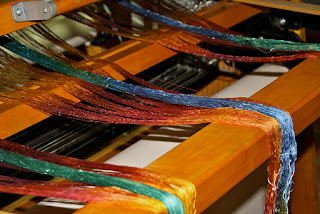 It all looks so nice and neat, doesn't it? Well, it wasn't. Not at all. There are some tricks to make it easier, however. For starters, when you beam 60/2 silk, it's a good idea to forget about the lease sticks and just use a raddle -- then, when you're at the end of the warp (when the warp is nearly all on the warping beam), you insert your lease sticks, move them around behind the heddles, and start your threading. That way the silk won't get abraded or stuck in the lease sticks.
Another secret of working with very fine silk: Don't make any mistakes. I made mistakes. Long story short: I called my weaving guru, Joyce Robards, midway through the process to say some nasty things about silk. She made me feel better.
So now the warp is finally beamed, although I still have worries about how it all will weave.
Tomorrow begins the threading....
One more image to share with you: the last honeysuckle blossom of the season, brought to you by Mother Nature, the greatest dyer of them all. 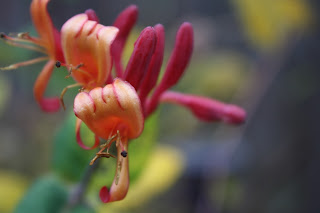