A Visit from Carol James, Author of 'Fingerweaving Untangled' and 'Sprang Unsprung'

Wonderful things can happen just by chance -- as when I recently got an email from Carol James, author and teacher on the ancient textile techniques of fingerweaving and sprang.

Seems that she was headed from her home in Winnipeg, Manitoba, for upstate New York and on to Virginia -- specifically Mount Vernon, where she was to donate a thread-by-thread replica of a sprang sash woven in 1709 and worn by George Washington.

Would our weavers' guild like her to visit? Of course!

Her books arrived on my doorstep a few days before the author herself: Fingerweaving Untangled (available from Amazon by clicking here) and Sprang Unsprung (available from Amazon by clicking here), both offering colorful and clear tutorials on their respective techniques. And then Carol herself arrived, bringing along a suitcase full of samples and a special bag holding the 7-foot-long sash. It was a thrill to see this masterwork. (The photo below doesn't really do it justice, but it gives you some idea of the work and skill involved). 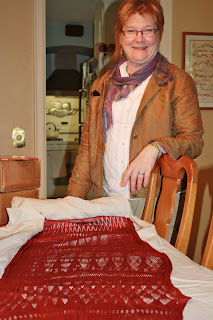 James and her replica of Washington's sash

A few of the details from her talk on sprang, which dates back as far as the Bronze Age, when it was used to create garments: She showed us photos of wonderfully detailed sprang caps on peat bog bodies in Copenhagen and told us about a researcher in Munich who has found images of sprang in ancient Greek statuary. Through the Middle Ages sprang was likely the method used to make stockings and other clothing, and from the 1600s on, it was used to make military sashes such as the one worn by George Washington. 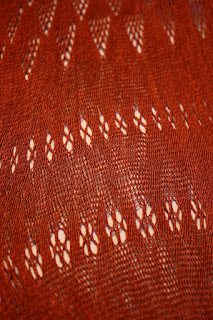 A detail of the sash, which was woven in reeled silk
and dyed with madder and cochineal

Sprang is a braiding technique, says James. There is only warp and no weft, resulting in textiles that are highly elastic. The noted rug weaver and author Peter Collingwood has been quoted as saying it is the ideal method for making clothing. She enthuses, "The best part is that you get TWO rows of cloth for every one row worked."

Many thanks to Carol for visiting and for sharing her knowledge with us. Soon, visitors to Mount Vernon will be able to see, for the first time, what Washington wore as a sign of his military leadership. The original is tucked away in storage, far too fragile to be on display. Which means that another piece of our textile heritage has been brought to light.

For more on Carol James and her work, visit her website at http://sashweaver.com/ 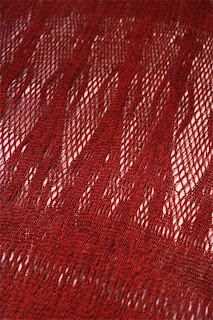