Just Off the Loom: 12-Shaft Double Weave from Stubenitsky's Echo and Iris 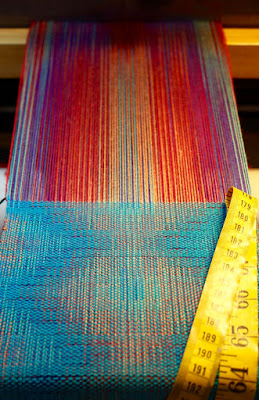 A while back, I wrote about how to re-work a 12-harness double weave pattern that had a LONG lift plan. What to do when you have just 14 treadles and the drawdown calls for 24? Basically, I shortened the treadling -- using the same twill pattern but ending it at treadle 14 -- and it worked just fine. The photo above shows the piece on the loom.

To back up: the pattern was from Marian Stubenitsky's book, Weaving with Echo and Iris. On page 163, she shows a multi-color double weave pattern with four colors in the warp and two in the weft. Since I had a lot of 18/2 superfine merino in my stash, I wound a warp and beamed it on, mainly because I had never woven anything like this before and I was excited to try.

There were problems, of course. (Need I say this? I think of every warp as a journey and I always have to work the kinks out at first, even when I have woven the same pattern before.) For instance, the treadling was on a curve, ascending and descending to create the diamond shape you see above. Trouble is, when you're weaving double weave, you have to "skip" a treadle as you reach the point where you reverse order -- otherwise, you repeat a pick and it looks like an error. So, where you would normally weave 6-5-4-3-2-1-2-3-4-5-6, for instance, you can't do that with double weave. The reason being that the odd-numbered treadles are weaving one side of the pattern and even numbered treadles are weaving the opposite side -- and that means the even-numbered side would have a repeat: 6-4-2-2-4-6 with nothing in between the 2's. So you have to skip a pick on that side, weaving 6-4-2-4-6.

If you don't follow me on this, suffice it to say that I had to adjust the treadling a bit. And then there were the selvages.... It took me maybe 12 inches of weaving before I got those right. Not easy.

And finally, there was the problem of not being able to see the underside of the fabric as I wove. This isn't a problem unless you're weaving double weave, where the bottom layer is different from the top. Many weavers recommend using a mirror attached to the breast beam so that you can see the bottom layer as you weave. Which I should have done. It's a lot easier to correct a treadling error on the loom instead of stitching in a new weft with a tapestry needle once the piece is off the loom.

Enough complaining. Here's how it turned out, after plying the fringe and washing (and fulling it slightly). 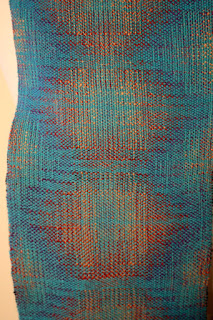 The black side, with an iridescence
that reminds me of oil in a puddle

That is really stunning.