Anyhow, I'm getting ready to teach at MAFA (MidAtlantic Fiber Association) in Pennsylvania and  at the Hartford Artisans Weaving Center in Connecticut. And I'm winding warps for both workshops. LOTS of warps. For MAFA, I wound ten seven-yard warps and for Hartford, I'm working on 18 eight-yard warps. I am not sure I will ever set up another workshop where I wind so many darned warps ahead of time.

So, what to do? My warping board is big enough, certainly, but it requires a lot of moving back and forth and up and down. Which is inefficient and slow. 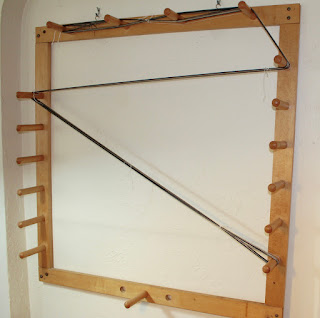 The answer for me was a warping reel. I can stand in one place and, moving slightly, wind an eight-yard warp in less time than it takes on a warping board. While I'm not one who aims to weave as efficiently as possible (if I wanted efficiency, I probably wouldn't have become a weaver in the first place), I do appreciate saving time on production work.

I borrowed a warping reel from my friend Leslie Mendelson and it helps a lot. (Thank you, Leslie!) Which is why I made this video, in hopes that someone else could benefit from a demonstration. Thanks to my husband, Larry, for directing, production, and financing ;o)