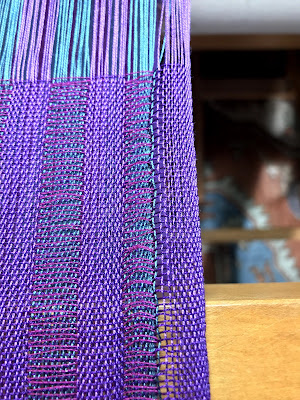 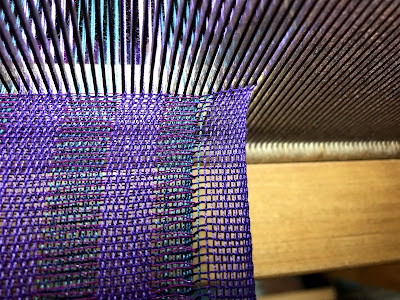 Totally agree with better selvedge when you beat on an open shed. I wish the myth about beating on a closed shed would die!

Glad you agree. It would be interesting to know how many weavers know this!

I have always woven & also taught beating on an open shed. However if I lay my weft in at an angle, close the shed & beat I get less draw in.. thoughts?

Ettenna, this is a mystery to me! Perhaps the key here is laying the weft in at an angle. My teacher always said that the ideal angle for this is 45 degrees -- but I find that I can't manage that, typically, because of the short depth between fell line and beater (as opposed to the width of the warp in the reed). So yes, a steep angle will give you lots of weft to adapt to wriggle in and out among the warp threads, don't you think?

Still, my experience has been that I get less draw in by beating on an open shed, given that I don't lay the weft in at a steep angle. Perhaps the actions of throwing the shuttle and beating are more individualistic than we realize. Or there may be other variables, such as the type of yarns, sett, who knows?

When the weft lays in the woven warp it does not lay in a perfectly straight plane. It curves around the warp threads. Therefore it needs extra thread or the edges will draw in. That is why a 45 degree angle works and beating on an open shed - the extra yarn is either locked in by closing the shed on the angled weft OR the extra yarn needed comes from the slack weft outside the warp. That is why you never hold it tight as you beat in the weft but rather let it droop off the selvage edge- so the extra weft needed can come from the excess thread between your selvage and the bobbin. Hard to explain - easier to illustrate. Also if your yarn is hairy you need to always have some angle so the yarn at the small end of the triangle formed at the selvage by the open shed does not "hold" your weft. If laid in perfectly straight the extra needed to curve around the warp threads cannot come from the extra between the selvage and the bobbin. I am sure you know all of this and I am "preaching to the choir" but if a new weaver sees it perhaps it will help them.
I find that if I am laying it in at an angle and still getting draw in that it helps to close the shed with the yarn held at the angle. There is experimentation involved as you don't want too much or too little.
I am always working on my selvages. I had someone recently tell me to move where I sit in relationship to the loom - for example a bit off center point to one or the other side. I haven't tried that yet - on the next warp!

Thanks, Ettenna! I call this "Mindful Weaving."