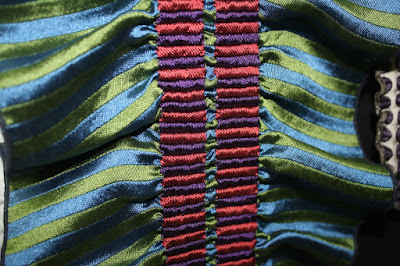 The photo above shows you what inspired this post: an extraordinary scarf using a collapse technique, created by British weaver Sally Weatherill. Her deflected double weave scarves are to die for -- but it's this silk double-weave scarf that I keep coming back to.

A few years ago, I spent way too much time trying to figure out how to draft this. Finally, I gave up and sent her an email -- to which she replied quickly and generously, sharing her draft and eventually some samples with me.

And guess what? All my analysis was in vain! The scarf was woven HORIZONTALLY on the loom while I had spent hours looking at it vertically. Beginning with a warp of green and blue silk, she wove a band maybe 10 inches deep, using inactive wefts in green and blue silk alternating with active wefts (elastic, I'm thinking, in the fuchsia and purple areas) and then cut it horizontally and serged the sides. This approach, assuming you have a very wide loom, would allow you to weave many scarves on just one warp.

So much for my thinking out of the box....

Here's the draft, thanks to Sally: 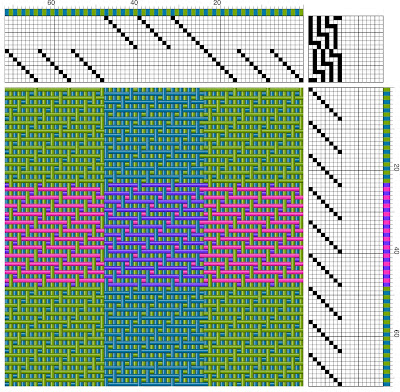 Look closely at the tieup:

The threading and the treadling are both straight draws, so the key to this beautiful design lies in this double-weave tieup. Does it look strange to you? Many weavers (myself included) find double weave hard to fathom.

So, for my benefit and hopefully for yours, let's break it down, looking at designing double weave on just 4 shafts with weaving software -- Fiberworks, in my case.


We'll weave the top layer on shafts 1 and 3 and the bottom layer on shafts 2 and 4. And we will use two different colors to represent each layer: in this case, purple and green.

Note: It's hard to see how double weave really looks in Fiberworks because you really can’t look at both layers simultaneously. So, in part, you have to use your imagination. Keeping that in mind, here’s the first step. 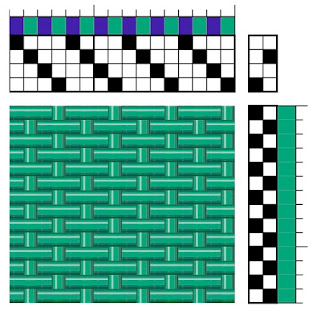 So how do you create a tieup for weaving the bottom layer? Here's my approach: I like to say that, to tie up the bottom layer of double weave, "up is down and down is up." You could also say that, instead of a rising shed in the tieup, you're tying up a sinking shed for the bottom layer. And yet another way to look at it is like a photo negative: what is black in the original tieup becomes white, and vice versa.

So, the tieup for the bottom layer looks like this, where your weft will be tied down (you might say “tied up,” remembering that this is double weave) with shafts 4 and 2:

Next you combine the two tieups for the two layers, because for traditional double weave you will weave the layers alternately, using two shuttles, to keep an even fell line. This treadling weaves on opposite sheds to achieve a two-layer structure. 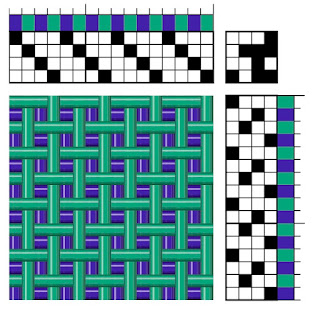 Another way to draft it is with a straight draw in the treadling: 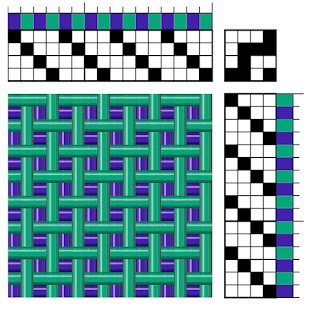 That's it. Of course, once you get into more than 4 shafts, there are many variations, including the 16-shaft tieup for Sally Weatherill's scarf. Browsing the internet, I have found compilations of suggested tieups for double weave. Marian Stubenitsky's book, Echo and Iris, is a good reference. And if you really want to dig deep into computer drafting, you might want to purchase Marg Coe's book, 4-8… Weave!

Thanks for reading. Hope you're not seeing double! 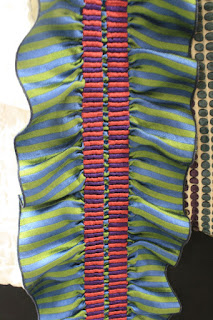