Jin Is a Tonic 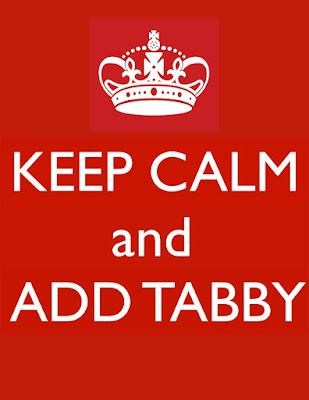 Actually, you can't weave true tabby when you're weaving Jin on an Echo threading. It's more of a half-basket weave, but anyhow....

This post talks about the rewards of Jin, also known as Turned Taqueté, and why it's such a popular structure to weave with, especially when it's woven on an Echo threading.

[First, however, a few credits to share. Kathi Grupp, advertising and marketing manager for the Handweavers Guild of America, deserves applause for starting the meme above, because she was the one who came up with it during a workshop I taught in Atlanta. Thank you, Kathi!

And, since we're talking about Echo and Jin, let's extend thanks also to Marian Stubenitsky, Bonnie Inouye and Margaret Coe, all of whom have made enormous contributions to the storehouse of knowledge in this area -- ever since Alice Schlein first introduced and named the design known as Echo in Weaver's magazine back in the 1990s. To be clear, Jin is an ancient structure, dating back thousands of years, as discussed by Becker in his seminal book, Pattern and Loom. But right now I'm focusing on the gorgeous waving multicolored designs that weavers are creating today.]

So, in Atlanta with Kathi Grupp and members of the Chattahoochee Handweavers Guild, we were discussing the popular weave structure known as Jin and how it solves all kinds of float problems when you want to design a viable fabric on an Echo threading.

Let's start with Echo, because that's the threading many folks use in designing Jin. Working with weaving software to design an Echo pattern, often you'll "test" your design with an ascending twill tieup, where half of the shafts are down and half are raised (meaning that when any warp thread in the design is up, its parallel will be down). Your pattern will show on either side, but in different colors. Brilliant! So many weavers love Echo designs, because they offer lots of freedom in creating curves.

Sometimes the test tieup for Echo works beautifully, depending on the threading. But, more often than not, it creates lots of long floats. Like this: 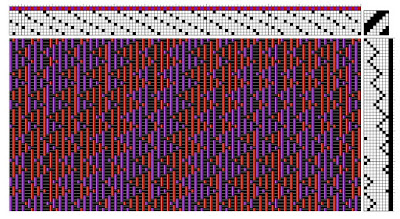 Bonnie Inouye's rule of thumb is that, when you're weaving Echo, you don't want warp floats that are longer than 5 picks (or weft floats that are wider than 5 warp ends). So this design fails by that standard.

What to do? Keep calm and add tabby -- to weave Jin -- which, by definition, will never give you warp floats of more than 3 picks. For that reason alone, Jin is a tonic. Plus, with two or three or four colors in the warp (using an extended parallel threading) and with the right color in the weft, you'll often get iridescence and, sometimes, new and unpredictable colors that are created by combinations of your basic colors in the warp and weft.

Further, I like to say that Jin is a very tidy structure, because of the uniformity of the 3-pick-long warp floats. 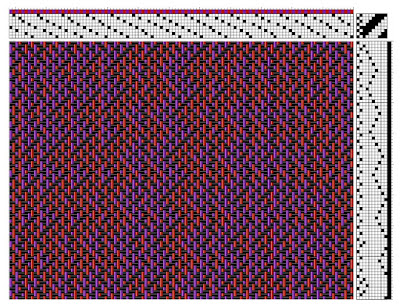 Another way to deal with the warp floats in an Echo design, rather than weaving Jin, is to break up the tieup. (I sometimes jokingly say that we are "tabbifying" the tieup, which is another way to "Keep Calm and Add Tabby.") 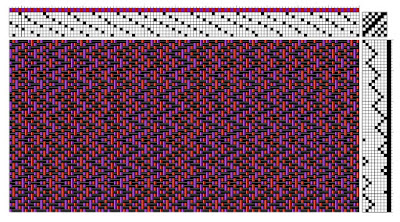 With this tieup, you're still weaving Echo, but you are limiting your warp floats to no more than 3 picks (and limiting your weft floats to no more than 3 warp ends). I like the way the advancing point twill treadling works to create strong black and purple zig-zagging lines in the design. The colors really dance on the screen, which tells me that it would be worth trying to weave, maybe using similar colors.

Talking about tabby: To repeat, you can't weave true tabby with Jin on an Echo threading. As I mentioned, you wind up with something like a half-basket weave, where one weft floats over two warps.

Jin is described by John Becker in his book Pattern and Loom as "warp-faced compound tabby." It's warp-faced because of the 3-pick-long warp floats on both sides of the fabric. And it's a compound structure (as is Overshot, for example) because if you remove the pattern wefts, you will still have some kind of ground cloth (made up of the tabby weft shots). A compound weave structure has two things going on at once, as I understand it.

Terminology is a challenge in weaving, almost like another language. That's one of the reasons I write these blog posts: They help me to understand the language of weaving.

Hope this helps you, too. Thanks for reading! 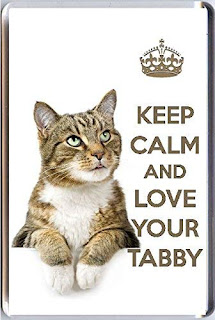 Thanks, Denise! A post to remember and to return to. Keeping calm!

Andreja Zelinka said...
This comment has been removed by a blog administrator.
February 13, 2020 at 3:34 AM