Weaving Psychology: The End of the Warp Phenomenon 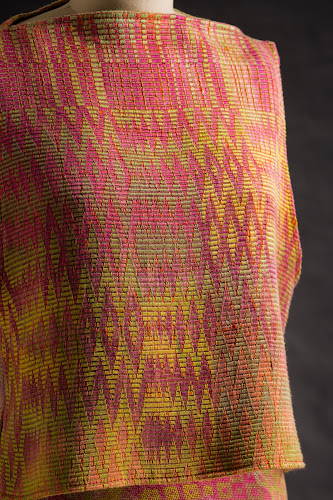 I’d like to make an observation – there's a question in there, too – about something you may have experienced in your own weaving practice. I certainly have.

Why is it that, so often, something we weave at the end of a warp comes out really, really well? Sometimes even better than the first part of the warp that we planned and wove so carefully?

The photo above shows you one of my favorite end-of-the-warp toss-offs. I'm being honest -- and I hope it doesn't sound boastful -- when I say I love it! And it just sort of happened, with less than a yard to spare at the end of my warp.

I was weaving the fabric below, with Echo and Jin treadlings on 12 shafts. I had planned the colors for months, painting two warps of 20/2 silk and beaming them together on the loom; carefully designing the threading, tieups and treadlings; and dutifully weaving it all up on about 12 yards of warp, using a 60/2 silk weft. 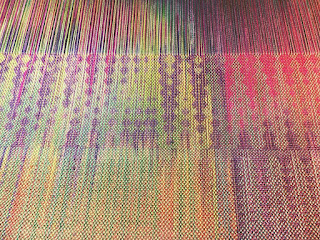 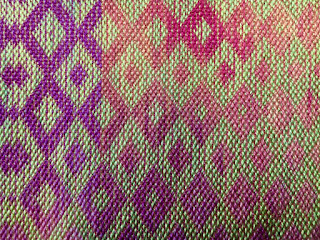 So at the end of the warp, I had maybe a yard left over and I got a little lazy. I wanted to weave it off quickly -- so I threw in some hand-dyed silk ribbon, just to see what happened, using a Rep-style treadling that alternated the ribbon weft with 60/2 silk for the thick-and-thin effect of Rep.

And here's what I got, which I did not expect at all and liked immensely: 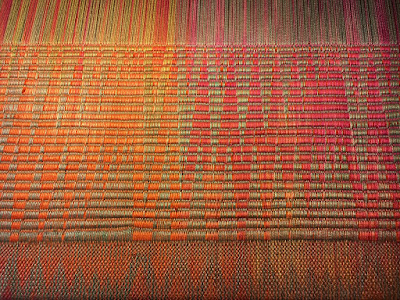 So there I was, with one yard of fabric that I wish had been 10 yards! Thank you, Robert Burns, for reminding us...

An' lea'e us nought but grief an' pain,

This kind of thing happens to me often enough that I have given a name to it: "The End of the Warp Phenomenon." Honest, I could go on and on about projects like these, snatching (unplanned) success from the jaws of (carefully planned) mediocrity. So I will show you just one more example.

It's another piece that came from the end of the warp and it was so short that I could make only a poncho from it. (The beautiful model is our future daughter-in-law, Catherine Demmer.) 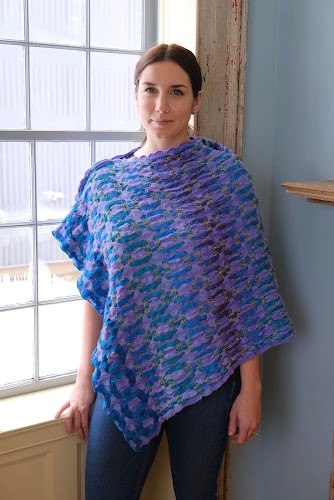 Same principle as the first piece I showed you: At the end of the warp, I had only a yard or so to weave, so I thought I would just try some metallic gold gimp as weft. (I was looking for a collapse fabric that I hadn't quite achieved with the rest of the warp.) Below is what it looks like up close. I was happy with the results, a Deflected Double Weave design with lots of texture on a ground layer of alpaca (lavender) that I worked hard to full. The turquoise warp is silk noil, which doesn't full. So that weft of gold gimp, alternating with the lavender alpaca, just wrinkled and curled in all sorts of interesting ways. 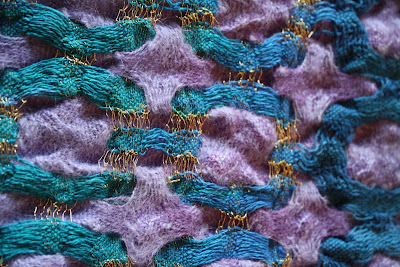 I mentioned this stumble-bumble achievement to a friend of mine and she observed, "Now you see what happens when you just throw cares to the wind!" Which she seems to be able to do all the time. (Laurie, are you listening?)

My frustration is, I can’t seem to make this happen all the time. The weaving goddesses have to be with me, you might say. Or, to put it another way: You win some, you lose some, some are tied and some get rained out.

Which brings me to the subject of psychology, because I think there are sound principles that apply to my End of the Warp Phenomenon. Psychologist and author Art Hochberg has said,

"The best way to do something is to do it without thought. That's real concentration."

Athletes do it all the time, simply because their reactions have to be faster than thought. So sports psychology comes into play here. Here's an observation about the flow state in athletic performance, written by sports psychologist Mike Edger:

"Many athletes who have achieved breakthrough performances say that it was 'effortless,' or that 'everything else disappeared.' This feeling that some call 'flow' and others call 'the zone' is a state where the athlete acts without thinking."

Of course, if athletes -- or weavers, for that matter -- acted without thinking all the time, we would not be productive or creative or focused at all. So, it's a matter of being prepared and being open to opportunity and being ready to take chances. To offer yet another quote, this one from Louis Pasteur: 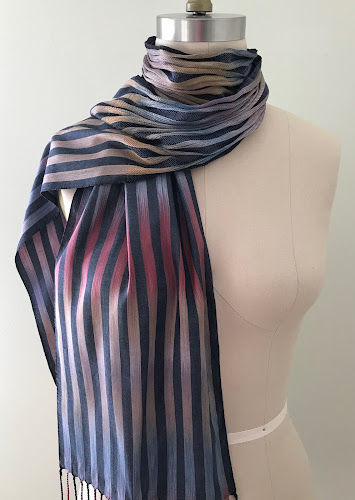 Pictured above, yet one more chance success, in my view: This scarf began as a 60/2 silk warp that was just hanging around my studio. I took it to a warp-painting workshop on natural dyes, just to see what happened. And I really like what happened. And it could very easily have gone the other way. I know, because it happens; I just don't post my goof-ups on my blog ;o)
Thanks for reading!