Showing posts from November, 2021
Show all

A New Book from Ann Richards: 'Weaving Structure and Substance' 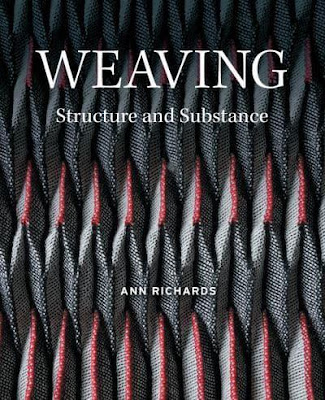 This is a case where you can  judge a book by its cover: One, it's written by Ann Richards, a weaver who for decades has achieved a singular beauty in her work. And two, the photo itself captures you, presenting a detailed image of her elegantly constructed "origami" cloth. The text and photos do not disappoint. Richards, who trained as a biologist before studying weaving at the West Surrey College of Art and Design (now the University for the Creative Arts, Farnham), brings her skills of scientific analysis and her love of nature to bear on her art. In Chapter 1, "Endless Forms Most Beautiful," next to sketches of a dragonfly wing detail and a cross section of its edge, she shares a photo of one of her pleated fabrics. (All photos and images are provided courtesy of Ann Richards.) Sketch, detail of a dragonfly wing Cross-section, the front part of the wing Detail of a pleated fabric woven by Richards, with the caption: "Warp: Linen. Weft: Crepe silk and ha
Post a Comment
Click here to see photos and read more....
More posts