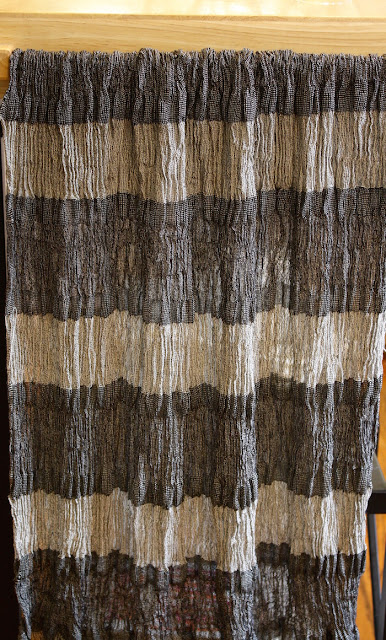 Just off the loom: a one-yard-long sample of vertical pleats in black and white. (Can't get enough of the beauty of simple plain weave in black and white! My inspiration is the work of Ann Richards, author of Weaving Textiles That Shape Themselves.)

This sample is for a coat I hope to make, so I made a warp of 11.5 yards in length. On the loom, this fabric is 45.5" in the reed but, after washing in hot water and dishwashing liquid, it collapses to about 20" wide -- a shrinkage of more than 55%.

The warp is alternating ends of black and white 60/2 silk. For the weft, I wove horizontal stripes, alternating between natural and black 30/1 S-twist wool bordered by a one-inch-long stripe in black 60/2 silk. Because the weave is very open -- at 32 ends per inch and about 30 picks per inch -- the yarns have lots of "wiggle room" to collapse in the wash. This means that the overtwist wool draws in horizontally, making vertical pleats, while the 60/2 silk weft remains the same, creating a seersucker effect.

I made a strategic decision -- you might call it a bad decision -- to start by tying this warp onto the thrums of an identical warp. All 1,456 ends of it.

Why, you ask? Good question! I think I just wanted to see if it could be done. And I thought it would be easier. (It wasn't.) I figured that I had already spent lots of time threading in an 8-shaft straight draw, so why would I want to go through that again? (What I learned: Tying on is a good idea when you have an intricate threading with no inaccuracies already on the loom. And if you want to extend the weaving length of your warp.)

Here's what the warp looked like as I began the process of tying on. 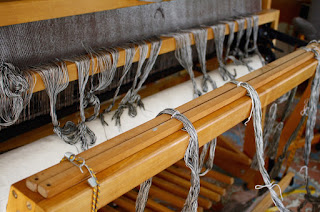 I followed the advice of Joyce Robards -- my weaving mentor -- and created four warp bouts, with lots and lots of choke ties (about every 2 feet or so).  You see in the photo above that I fixed the lease sticks to the breast beam, so that the cross was intact and secure before I began tying on.

Tying knots in all those ends was mind-numbing. And it didn't look that great, either ;o) 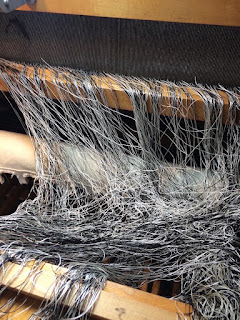 Seriously, though: It looks like a disaster as you are tying on, because you simply leave all the tied threads loose, one on top of the other. You don't want to touch them -- and you don't want curious creatures like cats or small children to start playing with the threads -- because they sort themselves out just fine in the end. IF you leave them, just letting them drop, as you knot them. It's actually pretty amazing, once you tension the warp again. Everything straightens out!

It's just the relentless tying on of hundreds of ends that makes you feel like Sisyphus. I was reminded of the masterful weavers of oriental rugs, who do this knot-tying thing for a living. The thought of their patience and persistence kept me going.

So, it all got beamed (taking days of combing and tensioning) and tied on the breast beam. The fabric looked like this on the loom. 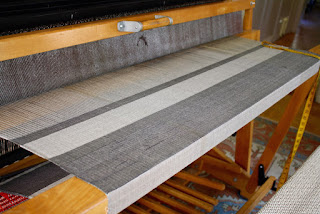 Very neat and orderly, right? That's not the way I like it. To me, the beauty is in the alternating of randomness and order that you see in the final product. 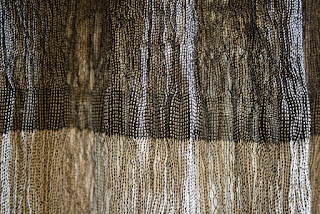