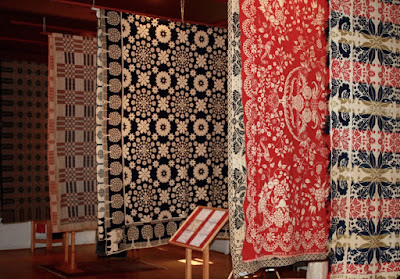 Here in western New York -- just 24 miles east of Rochester on the Erie Canal -- weavers can enjoy the country's largest collection of antique woven coverlets. Thanks to the enthusiasm and generosity of collector Merle Alling and colleagues, the Alling Coverlet Museum opened on July 4, 1976, in a beautiful old building in Palmyra, New York. 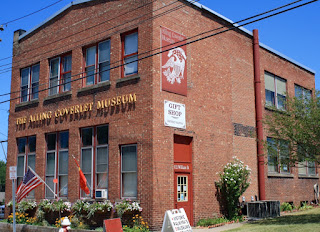 The museum houses some 400 handwoven and Jacquard-woven coverlets dating from 1820 to 1880, many of them woven by Palmyra natives Ira Hadsell and James VanNess. Weaving was a profession largely of men until the Civil War and the Industrial Revolution.

From my viewpoint as a weaver, dyer, and handspinner, the pieces are masterful, starting first with the yarns themselves, many of which are handspun and then hand-dyed with indigo and cochineal. The brilliance of the weaving continues to amaze! 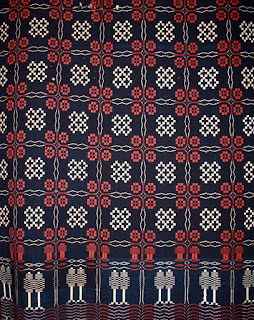 Many of the coverlets were woven just before the Civil War, when hopes to preserve the union were fraying. You can see the patriotic fervor woven into the fabric. 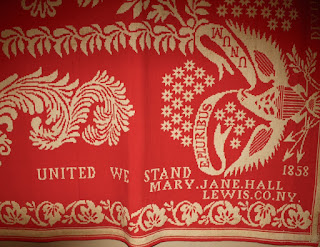 Typically, the weavers were commissioned to weave a coverlet for a homeowner, whose name they wove into the piece (as with Mary Jane Hall, above). Double weave, summer and winter, overshot, Beiderwand, point twill -- the names of the patterns are familiar to anyone who studies weaving. Sometimes, however, it's difficult to analyze, as in this piece below, with a description that reads "Jacquard Combined Weave, Lilies of France." 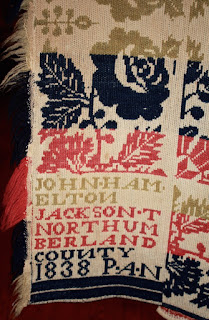 An important note: the Jacquard loom, which used a peg plan much like the key-punch cards of the 1970s, was the progenitor of the computer! Anyone who is interested in weaving history and science history would enjoy the book, Jacquard's Web: How a Hand Loom Led to the Birth of the Information Age, by James Essinger.

The book is available in the museum shop, along with a lot of other wonderful books, pillows made from coverlet remnants, and other gifts and memorabilia. The museum is open Mondays through Saturdays from 1 to 4 p.m. In the summer, you will meet members of the Weavers' Guild of Rochester, who often work as docents for this historic treasure. A visual feast! 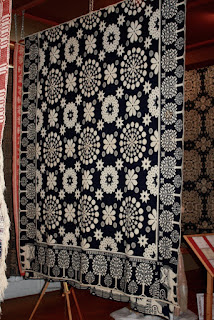 I have been enamored with antique coverlets since I was a child and would dearly love to get my hands on one. What I cannot understand is why, with the awesome technology available today, we don’t see mass scale reproduction of these gems? If you have any such sources, please pass them along. Thanks for your lovely blog.

Eve, my daughter has one that she may be willing to part with. If you send me an email at dkovn[at]hotmail.com, we could talk more about this. I think the reason that we are not seeing reproductions of them is that they are very labor intensive!

I bought an 1849 Susan Findley woven at Palmyra N.Y. by J.Vanness coverlet at a yard sale. It's in awesome condition. I'd really like to find out more about its history and worth. I would appreciate any direction, thanks

Tanya, this sounds like a gem. A few suggestions: Depending on where you live, you could either take the coverlet to the museum in Palmyra or email them and send them a photo. Also, there is the National Museum of the American Coverlet in Bedford, PA, which is in south-central Pennsylvania. Another option (again depending on where you live), you can simply Google "textile appraisers near me" and contact someone in your area. Finally, if you want to go "big time" (which will have a fee, of course), you could contact Deborah Miller Appraisals, based in Chicago. She specializes in fashion and textiles and has worked with Antiques Road Show. Her link is: