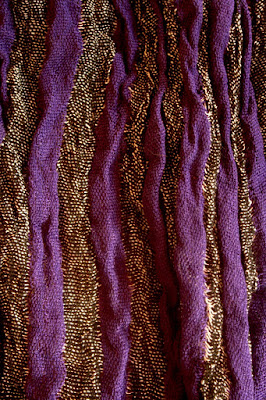 Off the plane, out of the box, off the grid – however you phrase it, textural fabrics are three-dimensional and non-rectilinear, unlike any other kind of weaving. In addition to the beauty of color and structure, texture is another pillar of weaving. That's why I love dimensional fabrics so much! I like to describe them as “Tactile Art.”

Studying collapse techniques over the past year, my mantra has been “Sample, sample, sample.” (Never mind that I used to think I just wasn’t a samplin' kinda gal.) Sampling offers so much information, because structures, yarns and finishing can create so many different results. And, to my surprise and delight, just 4 shafts can produce beautiful fabrics that, at first blush, appear very complex.

Which is the case with my latest round of samples, on a warp of 60/2 silk in purple and black stripes. I was in search of pleats – the kind that people weave when they have two back beams that they advance at different intervals, with one layer of a double-weave warp on each of the two back beams.

Simply put, with this technique, one layer is woven for just a few picks, in a “short” section, and then the second layer is woven as a longer section – many more picks. The shorter layer draws the longer layer in – and after washing, the layer with more picks flattens out into nice neat pleats. Ironing might enhance the effect, depending on what you're going for.

Which is a great technique, except that I don’t have two back beams on my loom. So I set about finding an alternate method.

Here is my first sample, aiming for horizontal pleats. 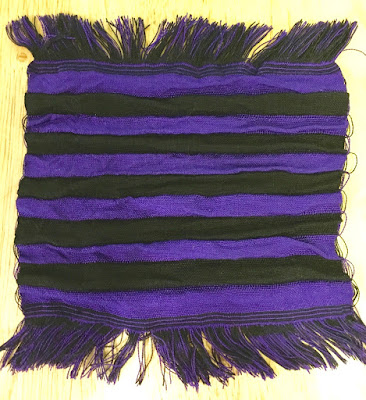 No ironing, just washing, although I think ironing might help. The piece was set at 96 epi -- 48 epi per layer -- which sounds grueling, but it's not so bad with a small sample on a table loom.

Here's what it looked like, front and back, before washing. 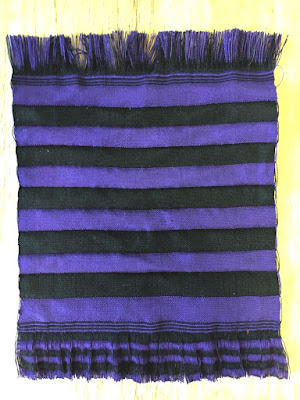 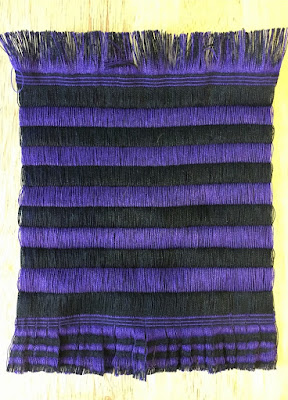 Are these designs all about relaxing? About yarns and structures doing what they want do naturally? I often wonder about the metaphors in there....

Here is the drawdown, as seen from the front. 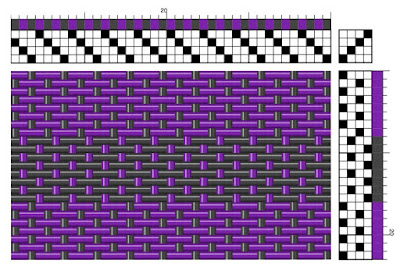 So then I got to thinking: If the pleats work well with a horizontal structure, they could work well with a vertical structure, using the same yarns. Plus, I would be able to experiment with different wefts, using a variety of exotic and overtwisted yarns. So I recreated the cross, put the lease sticks back in, pulled the threads out of the heddles, and re-threaded them for vertical pleats.
Here's the drawdown. Different shade of purple, I know....

Funny thing: You would think that if I wove the exact same structure -- a double weave where the two layers alternate as stripes, one layer weaving plain weave while the other layer floats behind it -- and I just turned it, the results would be the same.

No, not at all. The warp threads that draw in vertically with the first structure DO NOT DO THIS when they are weft threads. Take my word for it. I do not know why. (This happens all the time with collapse techniques: When you turn a draft, the yarns do not behave or misbehave the same way.)
Undaunted, I proceeded to try a variety of energized and exotic yarns as weft, weaving double weave and plain weave and playing with floats. For instance, I do not recommend warping with crepe silk from Habu -- it seems to be about the grist of human hair -- but it's wonderful to use as weft. Here are some photos of the results. 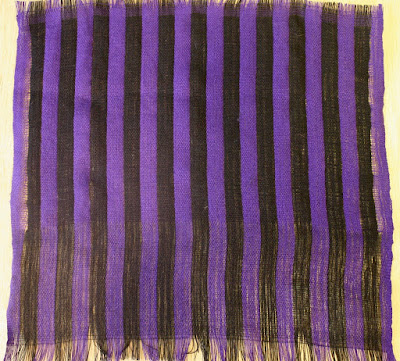 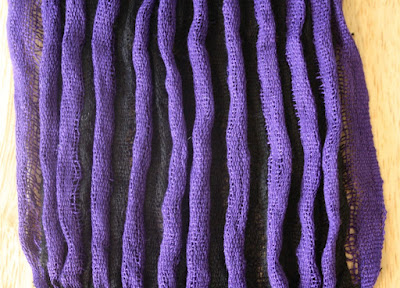 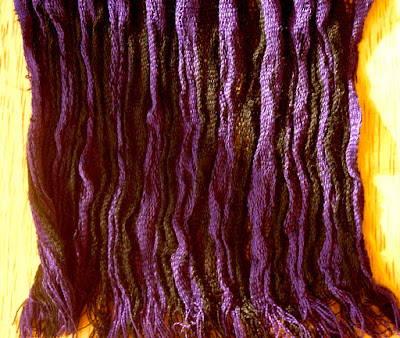 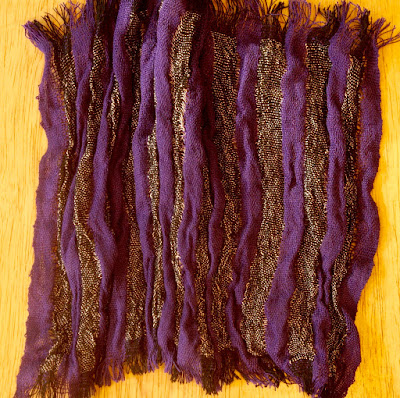 After washing: double-weave structure using 60/2 silk/stainless steel in ecru as weft. The first photo in this blog post shows a detail of this swatch. 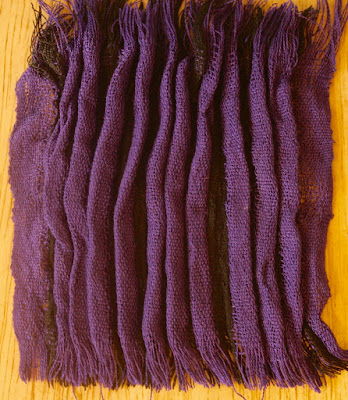 It's tough to show the dramatic shrinkage of the sample above. It was 12" in the reed and is now about 3" wide, mainly because the weft is a gossamer-weight silk crepe from Habu Textiles. The grist is roughly 33,000 yards per pound. (Compare that with 60/2 silk, which is 15,000 yards per pound, and you get an idea of how fine this is.) It shrinks up amazingly well, but you have to weave an awful lot of fabric at a shrinkage rate of 75 per cent.

Later this month, I will be teaching a workshop on collapse fabric at the Etobicoke Handweavers and Spinners Guild in Toronto, Ontario. Looking forward to collapsing and relaxing! Thanks for reading.