Book Review: 'Hidden Tapestry: Jan Yoors, His Two Wives and the War That Made Them One' by Debra Dean

"It is what is unseen in a person or drawing that makes them interesting."
-- Jan Yoors

Among the great tapestry weavers of the 20th century is Jan Yoors, a Flemish-American artist who was also an author, photographer, humanitarian and World War II Resistance fighter. At the peak of his fame in the 1970s, as a Greenwich Village bohemian, his massive works were shown in museums, galleries, public buildings and collections worldwide.

As a weaving blogger, I received a review copy of this book and pretty much devoured it, thanks to Debra Dean's eloquent portrayal of an extraordinary life.

Dean -- author of the best-selling novel, The Madonnas of Leningrad -- recounts how she came to write this: "Eight years ago, my friend Mitchell Kaplan and I were talking in his Coral Gables, Florida, bookstore, Books & Books. 'I've got your next book,' he said. Authors hear this a lot, and it's never, ever true. Except this time."

The story would be unbelievable if it weren't true. As a child growing up in Antwerp, Belgium, the son of a social-reformer mother and an artist father, Yoors ran away with the Romani Gypsies when he was 12, returning home six months later. He did this every summer for years, learning their language and free-spirited ways. As an adult, he wrote about his life with the Romani: I'm reading The Gypsies right now, a document of a vanishing way of life that has immense appeal.

The most gripping part of the story is his work with the Resistance during World War II, much of which couldn't be documented. As an adult in war-time France, speaking multiple languages and working with the secretive and elusive Romani, he risked his life in fighting the Nazis, first as a saboteur and later as a guide to freedom for Allied soldiers trapped behind German lines. He was successful to the extent that he was twice imprisoned and tortured by the Gestapo.

Still he survived, marrying after the war and moving to New York City, where he gained fame as an artist. The life of mid-20th-century Greenwich Village, knowing Warhol and Pollack and the community of artists and free spirits who lived there, is another chapter in his amazing story. The details of his married life -- living with his first wife and her best friend, who had been one of his many models and lovers -- are noteworthy but somehow unsurprising for his culture and background. To me it's a side story, rather than a one of the most telling parts of the biography. (The fact that the three together did all of the weaving of his massive works is a lesson in domestic harmony, for sure!)

At the end of the day, I highly recommend this book as it captures the imagination in so many ways. If you're interested in art, in textiles, in the history of World War II, in the life of Greenwich Village in the mid-20th-century, in the mind of a free thinker and humanitarian, then read it by all means. Thanks to Dean and her team for sharing it with me. 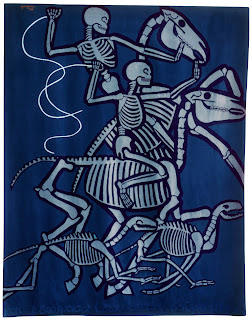