Fishing Line, Gold Gimp, and Wool/Lycra: What a Difference a Weft Makes! 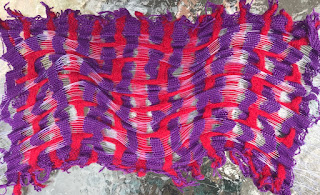 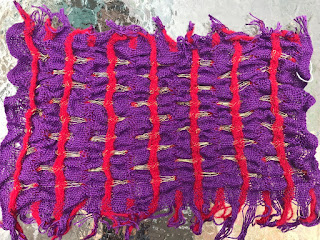 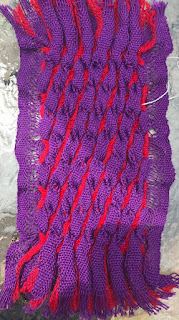 You know what it's like when you're at the end of a warp -- and you decide to just throw something in to see what happens? And you LOVE the results? That's just what happened to me a few days back, as I was weaving up samples for my upcoming workshop at Convergence, "Deflected Double Weave as a Collapse Weave."

Let's start at the beginning of the warp, with a design I created for Deflected Double Weave on 8 shafts. I wove up the first sample with 10/2 cotton in purple and 18/2 merino in red in both warp and weft, aiming for a collapse effect using differential shrinkage. (The wool shrinks in the washing and the cotton doesn't, so it puckers and collapses and creates lots of texture.) 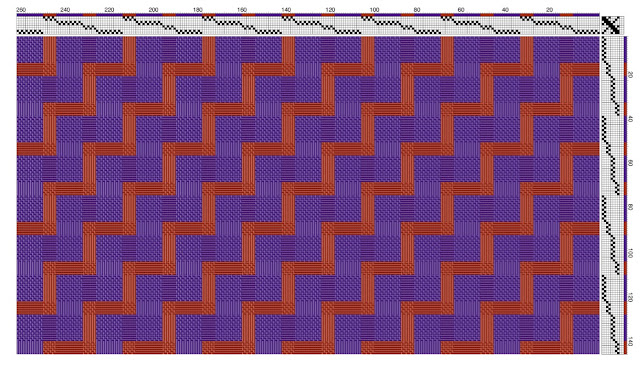 Here's how it wove up, before washing. 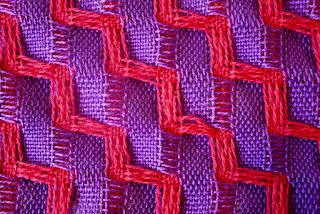 I was worried, before I washed this, that it would collapse diagonally. But it didn't, because each diagonal "step," with a vertical line of red connected to a horizontal line of red, actually has two opposing vertical and horizontal lines on the back of the fabric, making a square shape of yarn that will shrink. That's the nature of Deflected Double Weave: not only do individual yarns weave plain weave -- but groups (blocks) of yarns will weave in and out of each other, as warp or weft floats.

Here's how the sample looked after washing with hot water and agitating with dish soap. 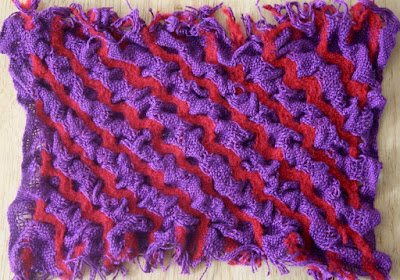 So, skipping to the end of my warp -- remember where I threw in an unusual weft yarn just to see what happened? In this case, I chose a lambswool/lycra yarn that would easily collapse. Here's what it looked like before washing. 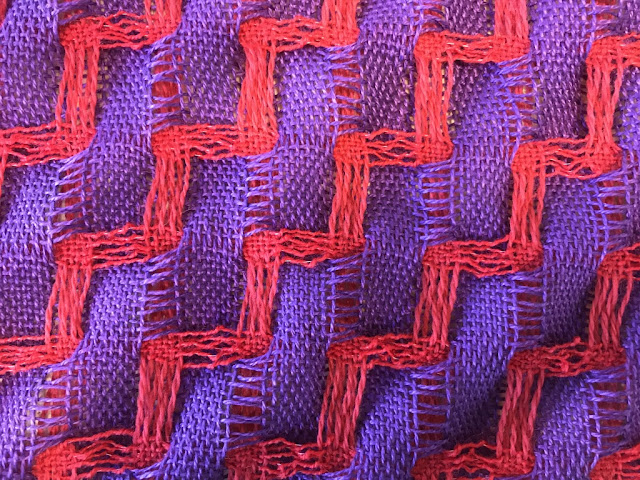 I'm posting this photo extra-large in hopes that you can see the wool/lycra: Looking closely at the squiggly red weft yarns, can you see a bit of white here and there? That's the lycra, very loosely plied with the lambswool. It's hard to imagine it will collapse much -- but it does. A lot, to the extent that the fabric shrinks maybe 50 percent width-wise. And you can stretch it back to its original width! Here's the finished sample. 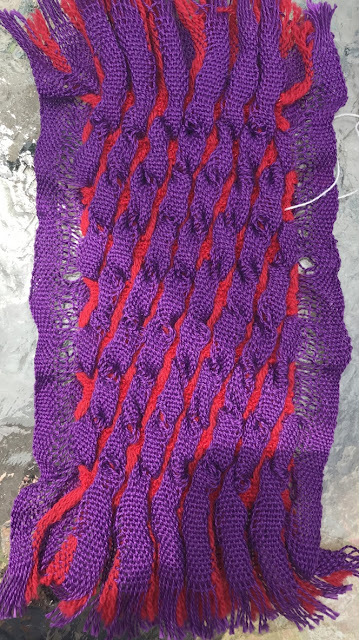 And what about the fishing line? It's also called "monofilament," and it's a great way to create interesting effects with yarns that DON'T shrink but instead make the fabric curve and undulate.

Here's the original sample, before and after washing, using the 10/2 pearl cotton and 18/2 merino in both warp and weft. (You'll note that I varied the tieup and treadling from the first draft.) 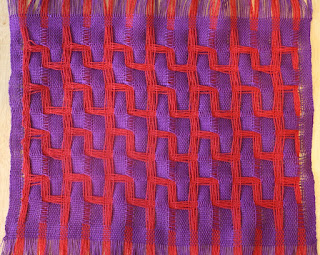 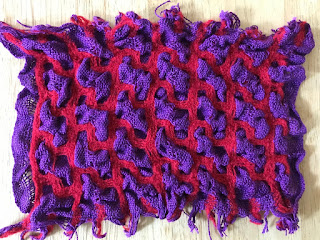 And here's what it looks like, before and after washing, substituting 14-pound fishing line for the 18/2 merino in the weft. (Picture a weaver walking into Gander Mountain to purchase weft yarns....) 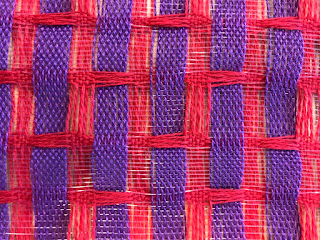 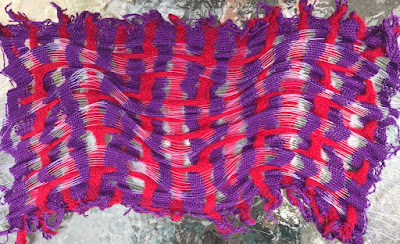 Wild, huh? I can see this writ large, for a wall hanging or even a window hanging, much like a stained-glass piece that lets the light shine through. One of my favorite weavers of all time, Liz Williamson, uses monofilament as an accent weft in conjunction with a wool or other collapse weft, which makes her fabrics curve and wind in graceful and unexpected turns.

As for the gold gimp: Here's the original sample, before and after washing. 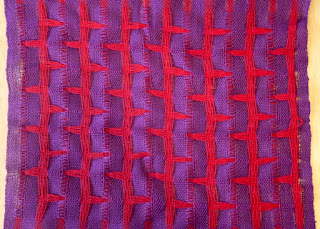 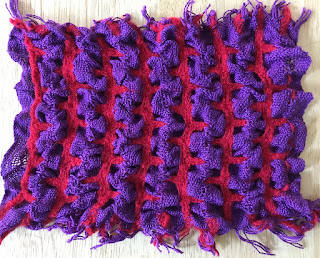 And here's what happened, shown before and after washing, when I substituted gold gimp yarn for the red merino in the weft. 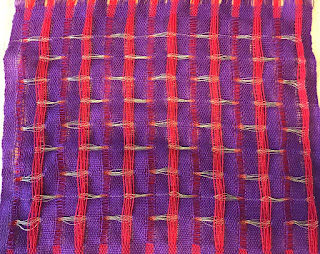 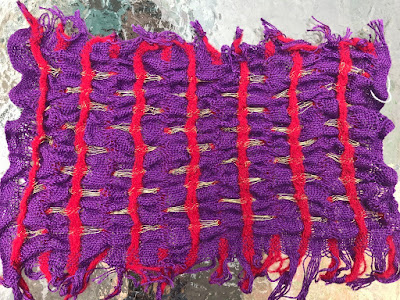 Gimp is a metallic-looking yarn, typically used as an accent. (Gimp is made of a core, such as cotton, wrapped in a sparkly thread and used in embroidery and trims.)

Still more samples to weave for Convergence. This is why we don't get a lot of housecleaning done these days.... but it's way more fun. Thanks for reading!