Baby Wrap in 16-Shaft Echo and Jin: On My New Computer Loom! 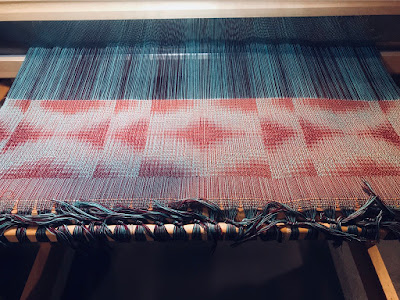 Echo, which is a border at the beginning and the end of the wrap 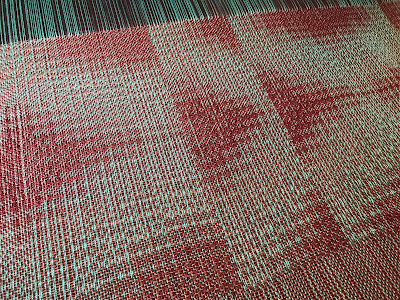 Great news! I have a new (to me) computer dobby loom: a 16-shaft Toika Eeva with a 40 cm weaving width. This Scandinavian beauty came to me by way of my friend and fine weaver Hedy Lyles, who enjoyed this loom but was moving up to 24 shafts. 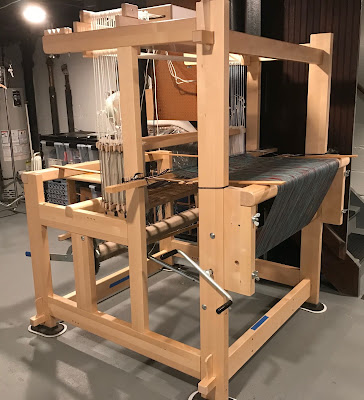 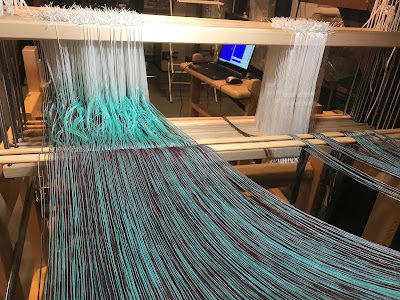 A view from the back of the loom

Because I've been teaching a lot of workshops on 4-shaft, 8-shaft, and 12-shaft Echo (and other structures you can weave on the same threading, using different tieups and treadlings), I decided to expand my repertoire to 16 shafts. Here's just a section of the Echo design, based on an advancing point twill in both threading and treadling. 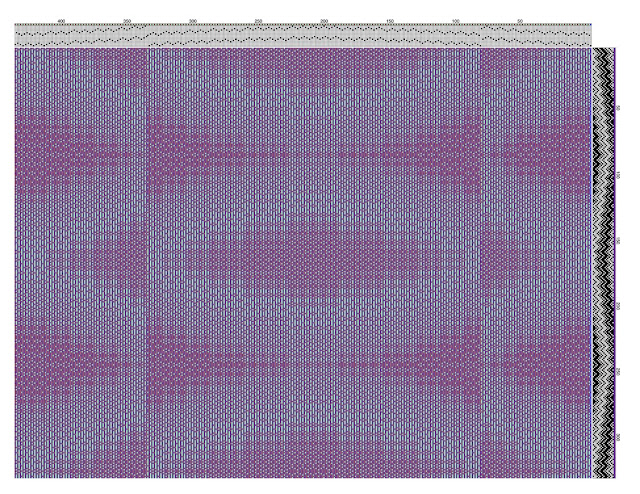 I can't really show you the entire drawdown because it's too large to reproduce on this page. Anyhow, it gives you the idea: I broke up the pattern line in several spots because I like the abrupt shift, almost giving the impression of stripes.

The wrap will be Echo for just 24" on each end, with Jin filling up the center. I did this for two reasons: 1) I love the variations between the two structures and 2) the Echo pattern has warp floats of as many as 5 picks while the Jin design, by definition, never has a float of more than 3 picks. So I figured that the fabric woven in Jin would be just that much stronger and more durable when it comes to supporting an infant.

Here's what the Jin design looks like (again, only a portion of it, as the entire design wouldn't show up well at all in this narrow space). Because I'm showing you just a portion, the design looks asymmetrical -- but the pattern is symmetrical. 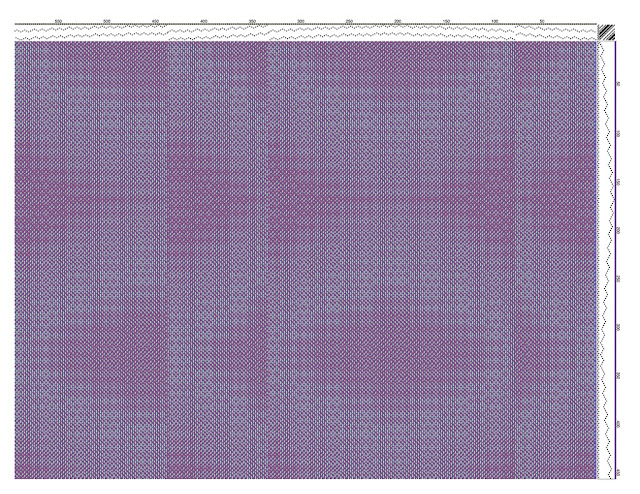 And here's what the Jin design looks like on the loom: 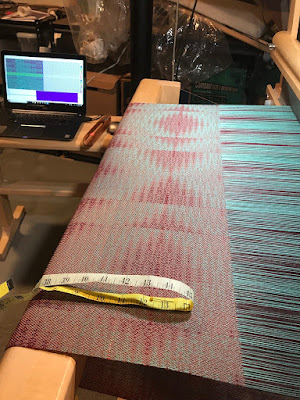 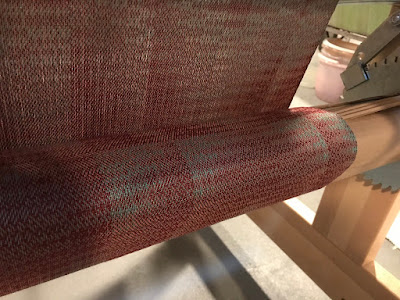 I find that there is a bit of a learning curve with a computer loom. For instance, if I have a misstep on the pedal that controls the treadling, it's hard to instruct the weaving program to go back. At least for me it is: sometimes the computer wants to loop around and I find myself right back where I started, having to unweave. And then you have to tell the computer to unweave. It's a tricky conversation, at least until I get the hang of it.

The upside is that the weaving goes much faster and is less physically taxing. This is especially helpful with a 20/2 cotton weft, which I'm weaving at about 30 picks per inch.

And another advantage: those 16 shafts! There is a lot to learn and a lot of designing to do and I'm looking forward to it.

Back to the wrap itself: One of the things I love about Echo and Jin is the color dynamics. I deliberately chose an unlikely combination of warp colors -- burgundy and turquoise -- because I knew from experience that the weft alters the overall color of the fabric in surprising ways, often producing the iridescence that Marian Stubenitsky covers so well in her book, Weaving with Echo and Iris. For the weft I chose an orange/coral color, sort of a cantaloupe, because it warms up the warp, so to speak. Below is a photo of samples of different-colored wefts, with the cantaloupe-colored weft at the very bottom of the photo. 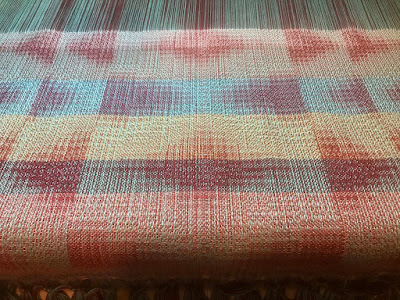 This is a very special project for a very special new person in our lives: Our first grandchild, Owen, who is now almost 3 months old. I think it will look good on him, don't you? 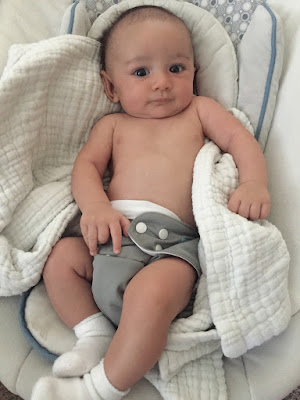 What a lucky baby, the wrap looks gorgeous.

Congratulations, Grandma! That is one beautiful baby!! And a beautiful wrap.

Stephanie, one place to buy it is www.whimsicalyarn.com. I will have to look up where I have purchased it in the past -- but 10/2 bamboo or soy or cotton also are 4200 yards per pound.

Stephanie, another place to buy 10/2 Tencel in colors is Textura Trading Company.