Gebrochene, Echo and Jin with Fiberworks: Putting 'The Earl' Through His Paces 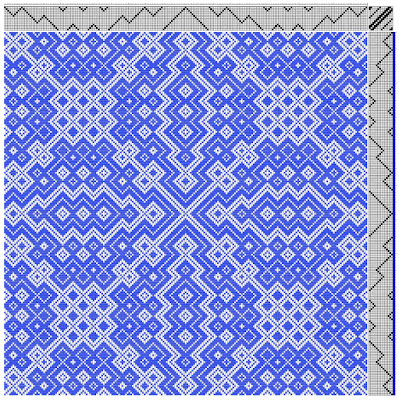 Ah, the old Weaver's magazine... such an endless source of inspiration! Recently, I was looking at an issue from 1997 and came upon a story by Marjie Thompson about the source of the above draft, "The Earl's Canvas." (Thanks to Thompson for sharing it with me.) She had given a talk to our guild about this years ago and I never forgot the beautiful silk scarf she wove.
The pattern was discovered in a portrait of John Erskine, second Earl of Mar in Scotland, in the National Portrait Gallery in Edinburgh. Painted in 1626 by Adam de Colone, it features a Jacobean noble with a lace ruff and badge of office. 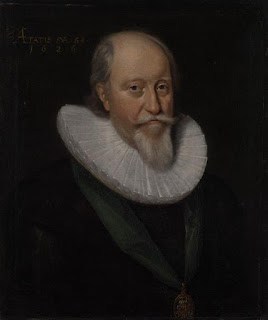 What's interesting to weavers, however, isn't the painting itself, but rather the canvas it's painted on. According to Thompson, a museum curator analyzed the pattern in the 1970s and found that it's actually a 14-shaft Gebrochene design that was probably an old tablecloth.
And what is Gebrochene (pronounced in German "geBROKena")? Literally it means "broken," but to weavers it's basically M's and W's. According to Thompson:
"It's a twill interlacement with an elaborate threading and treadling and a twill tieup. Usually both warp and weft are the same yarn, historically linen. Gebrochene tablecloths are pictured in medieval art and Gebrochene drafts are found in... books from the early 17th century. Patterns can be quite elaborate; one design by Jacob Angstadt shows over 900 ends in one repeat."
At last we get to the point of this blog post, which is: This beautiful draft can easily be translated into an Echo threading. And a Jin design. And Shadow Weave and Rep and Double Weave, all through the magic of Fiberworks.
You start by reducing the "The Earl" threading to 8 shafts (because not everyone has a 16-shaft loom). Next, under the Treadling dropdown menu, select "Weave as drawn in" and then make the treadling tromp as writ. Then select "Draft" and "Thickness" and click on "Exactly as drawn." 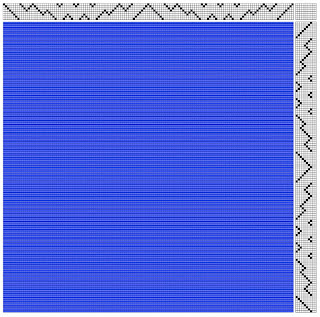 Next, using the Warp dropdown menu, click on "Parallel Repeat." In the box that opens, select "Extended Parallel," "Shafts shift by 4" and "Also duplicate colors and spacing." Then click "Apply." (And then "Close.") 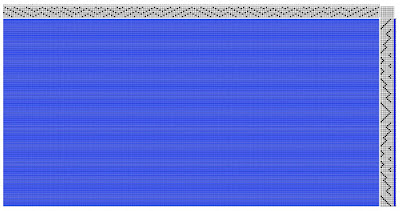 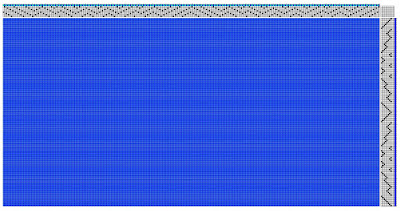 Hard to see in the above image, but if you look closely you can find blue and aqua in the boxes above the threading, indicating the colors of the warp threads below.

Next, create a 4/4 ascending twill tieup, which is a classic Echo tieup. The elementary way to do this is to draw it in by clicking on the boxes you want -- but to do it faster, you can just fill in the tieup for the first treadle and then click on the "Tieup" dropdown menu, select "Twill Repeat" and then "Step Up," "Step by 1," "Treadles per group 1" and "Apply." 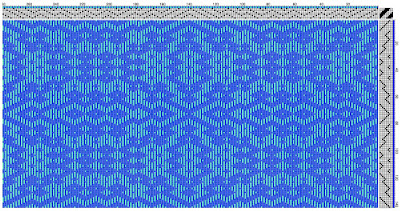 Yes, it's Echo and yes, the Earl pattern is identifiable -- but it has long floats. (A good rule of thumb, according to Bonnie Inouye, is that floats in Echo should be no longer than 5. This is where the "Float Search" function on the "Tool" dropdown menu in Fiberworks comes in handy.)
Next step, alter the tiedown by breaking it up so that the floats aren't as long. Here's an example. 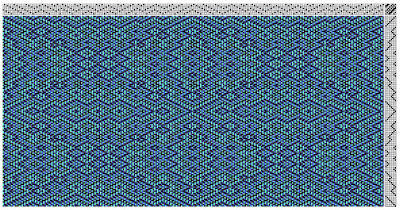 The motifs are still a bit squashed, right? There are ways to fix that -- one of them being to change the treadling.

Another way to alter the "flattened" Echo draft is to add tabby to the tieup, changing the structure to Jin. 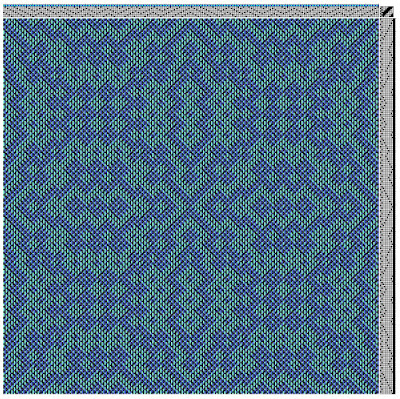 You can alter the Jin design a bit by changing the tieup to create what Bonnie Inouye describes as "decorated Jin" -- changing it from a 4/4 tieup to a 4/2/1/1 tieup (plus tabby, of course). 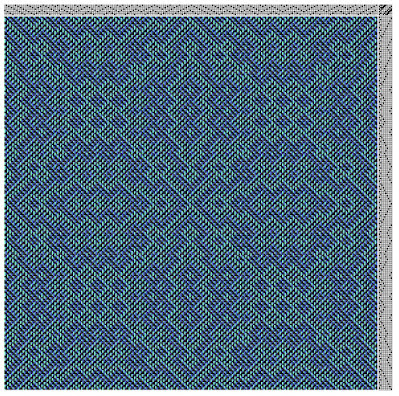 Now that's a design befitting an Earl, don't you think? At the risk of losing readers, I will show you a few more designs. Here's how the Earl looks as Double Weave (both front and back views). 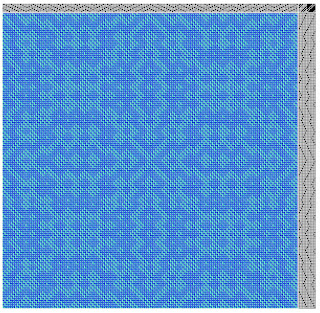 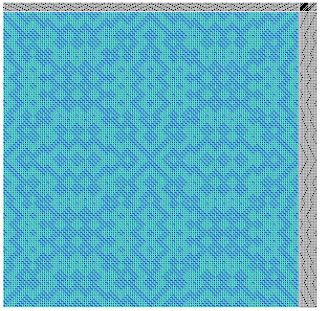 And here's a Rep version: 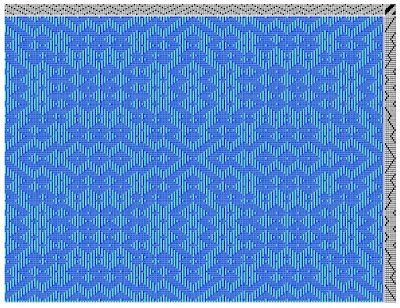 And then there's Shadow Weave -- although I'm not sure I like it so much. 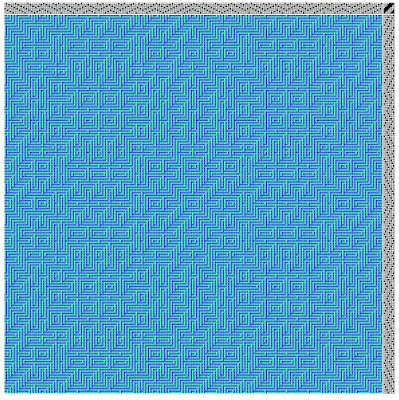 So there you have it: "The Earl" as interpreted for extended parallel threadings, 400 years after it was used as the canvas for a nobleman's portrait.
Thanks for reading!
[For further study: Eva Stossel is a blogger and peerless weaver who wrote about this subject on her blog and in the Complex Weavers Journal in 2012. You can read her blog post by clicking here.]