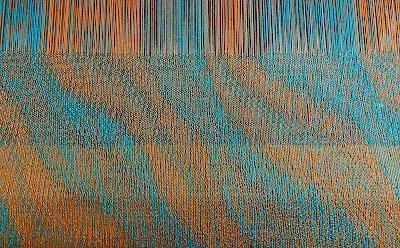 Learning curves, plural. For example: In the photo above -- a networked Echo threading on 32 shafts -- can you see two threading errors? I will give you a clue: They're pretty obvious ;o)
These are just two of nine, count 'em, nine threading errors in this project so far. I've named it "Learning Curves" because it's the inaugural project for a new-to-me 32-shaft Louet Megado.
I am thrilled, to say the least, to have this loom. However -- and this is a big however -- it may be 15 to 20 years old and may have sat unused for the past four years or more. Which means that, not only did I have to up my game to weave on such a complex machine (which meant hours and hours of designing on Fiberworks), but the loom itself had to be reconditioned, basically. (Spouses are useful in this regard, particularly if they are smart and willing to help out.) And learning how to recondition it involved making mistakes, lots of mistakes, in the process of weaving this first design.
For instance, ends fraying and breaking at the left selvage: Too much draw in (which I should know enough to avoid). My answer was to go easier with the shuttle and, more important, to use my lovely Bluster Bay end-feed-delivery shuttle, which really makes a difference on the "drag" of the weft against the selvages. 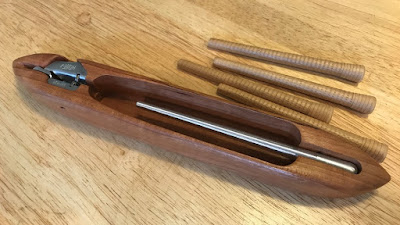 And then I needed Texsolv cord. Lots of it. 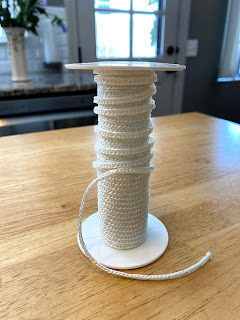 Texsolv: Don't weave home without it.
I needed -- well, rather, WE needed -- lots of Texsolv because the cords that ran the pulleys that connected to the dobby box that lifted the shafts... kept breaking. But what we didn't know was that, more than Texsolv, we needed Teflon spray to un-gum-up all the pulleys. 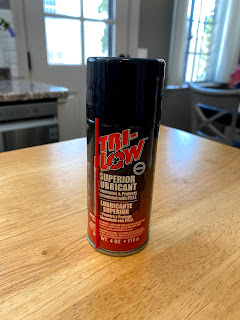 Teflon spray: It works.
We did lots of consulting, too, primarily through that brainy listserve known as WeaveTech (weavetech@groups.io, an invaluable resource for all questions weaving). There I learned how to get in touch with Dave Vanstralen, president of Louet Looms, who got back to me immediately and gave me lots of pointers on how to get this ship out of dry dock. And then there was Mimi Anderson, president of Complex Weavers, who pointed out to me that I should actually check back on WeaveTeach to look at all the answers people had posted. And Fran Osten (www.danforthweavers.com) who suggested using heat-shrink tubing to protect the Texsolv cord from abrading when it meets a screw that's attached to one of the pulleys. 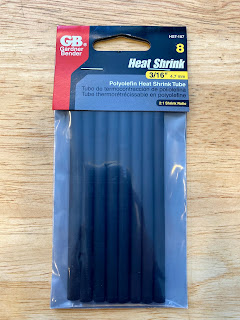 Heat-shrink tubing, which we haven't used yet, because painter's tape is doing the job.
I won't bore you with a photo of painter's tape! And I may be boring you right now, if you've read this far, because this is a blog about weaving and I haven't shown you any weaving.
Well, long story slightly shortened, I am finally weaving. There is just one more threading error to fix, but here is where I am at this point, weaving an Echo design on 32 shafts. 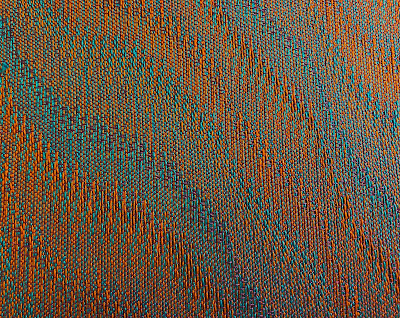 This same is the same tieup and threadling as the design in the first photo of this blog post -- but here the weft is an azalea-colored 20/2 cotton. 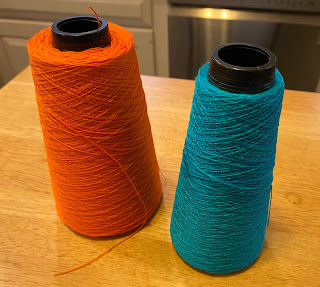 These are colors I would not ordinarily have chosen for an Echo warp, but that my previous blog post discussed the use of complementaries with Echo designs. I was thinking out loud about how complementaries can add so much energy and interest to a weaving -- and so I decided to go full bore with these striking colors. Not pretty, but striking.
I really like the results so far.

The top sample uses a dark forest green/emerald weft in 20/2 cotton, while the bottom portion uses a gold/khaki-colored linen singles that I don't think works as well as the cotton.
After this, I hope to do more samples: another Echo design, a few in Jin and a couple in double weave. I'm hoping to try some differential-shrinkage techniques with one of the double-weave designs. Here's the drawdown I'm thinking will work for pleating and puckering.

Meanwhile, I will keep the Teflon spray nearby. Thanks for reading!

I think this is lovely and I did spot the threading error and I do like the emerald green cotton weft more than the orange linen and now I'm trying to figure out how to reduce it from 32 to 16 and get a similar lovely result. Looking forward to seeing the results of what else you plan to do on this warp.

Have you tried treadling your threading? Long ago, when I first started using my 24 shaft loom, I stuck to straight draw and point threadings. I longed to do some of the more complicated threadings, but made so many mistakes that it took me hours to get them correct.

Sandra Rude introduced me to treadling my threading and I've been doing it ever since. I almost never make a threading mistake now. It has made all the difference in what I feel comfortable attacking. I don't always have good designs, but my threading isn't the problem now.

Oh yes, Beryl, I certainly did treadle the threading. Problem is, the shafts were sticking all over the place -- so that I kept getting all boggled up and losing my place. So, as I said, this was the inaugural weaving. Sort of like the first 1000 miles of a new car, maybe?

Is that you, Pam Carr? I think you could simply truncate the lines in the threading, because they are discontinuous. Yes, I'm sure you spotted that threading error!