How Many Samples Does It take to Get It Right? 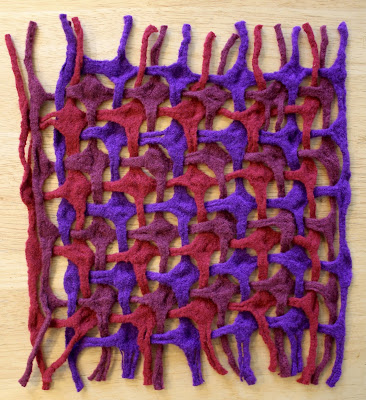 Answer: As many as it takes.
Which is kind of discouraging but, as they say, the truth hurts ;o)
The sample above is the best one, but it's the final one: it took me five other samples to get there! It's a 6-shaft Deflected Double Weave design that I'm working on. I want to weave what I'm calling a "Puzzle Scarf," just because it looks like a lot of fun.
I love the complexity of it and the mystery of how this can be done on 6 shafts. I also love the texture of this piece: It starts out as gauze on the loom, but when you full it with hot water, soap and agitation, it turns into a pretty indestructible piece of cloth.
Here's what it looks like on the loom: 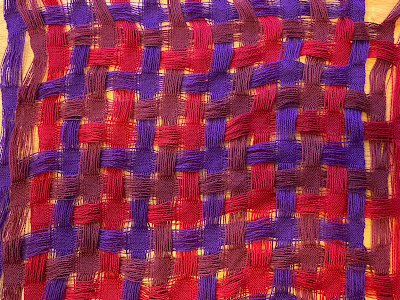 The process of fulling for this is fairly detailed, as you have to take the piece out of the water, wring it out and lay it out flat about every half minute in order to make sure that none of the "puzzle parts" stick together. You really want to define the image of three intertwining layers in the cloth.
So what about all the sampling? Bottom line, it's really necessary for some pieces. I believe that, if you take your work seriously -- that is, if you aim for certain results and you're intent on achieving them -- you have to do what it takes to get there.
Still, sometimes you have to fight the discouragement that comes with yet another bad sample, yet another re-sleying, yet another re-threading.... I think, as a weaver or a fiber artist, you do understand!
OK, the first sample. I wound a warp of 18/2 superfine merino from JaggerSpun in three colors, as you can see: red, burgundy, and purple. My sett was 24 epi in a 12-dent reed but I had to sley the reed with empty spaces between the colors to get the effect I wanted.
In the case of my first sample, I sleyed 6 ends per color and left 2 empty dents between each color. Which, after fulling, was too dense for my taste, giving the cloth the hand of a jacket fabric rather than that for a scarf. 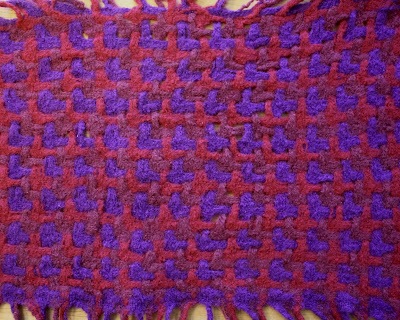 Too dense
For my second sample, I overcompensated: I again sleyed 6 ends per color but then left 4 empty dents per color in a 12-dent reed. 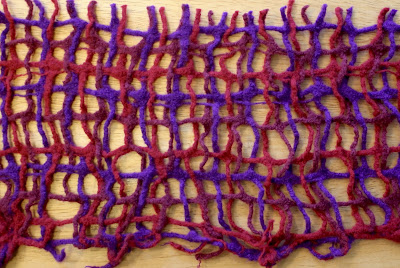 Looks like a confusing but colorful fishing net.
The trouble in this case was that my motifs were elongated (if you look carefully at the red warp and weft, for instance, you'll see long rectangles rather than squares). So my beat was off. And the cords that formed after fulling were way too thin, which meant that I had to re-thread from 6 ends per color to 12 ends per color.
Which I did, and came up with this. 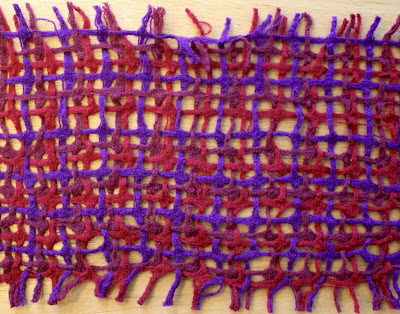 OK, so we're looking better, but still the motifs vary in shape.
My next thought was to re-sley so that there were just 3 empty dents between each color. And to try to beat more steadily so that each color formed a square (looking at both warp and weft together). 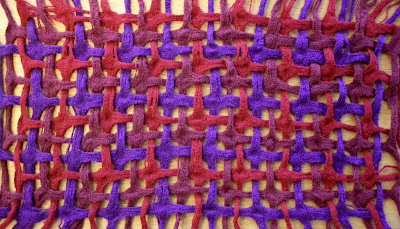 Better yet, but the cords are still too thin for me.
Back to the heddles, re-threading so that I would have 18 ends per color, still leaving 3 empty dents between each color. 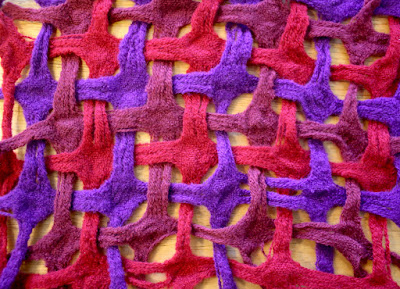 Now we're getting somewhere -- but the cords aren't fully fulled ;o)
Understand that, with each sample, I was learning a lot and I was gaining practice. I realized through this process that -- because this cloth is kind of a messy-looking fabric, with organic shapes and spaces in between the plain-woven blocks -- I had to finesse some of the details. I had to make it as tidy as possible, you might say. To me, this meant fulling the cords till they were solid (which involved sometimes cutting a wayward thread or two after fulling).
I think the results are worth it. But I have to confess, now I'm at the end of the warp! I have no warp left to weave that scarf I was planning, which adds yet another step to the project: re-winding another warp and re-dressing my loom. I'm not entirely unhappy with this, as I want to try different colors next time.
Thanks for reading! 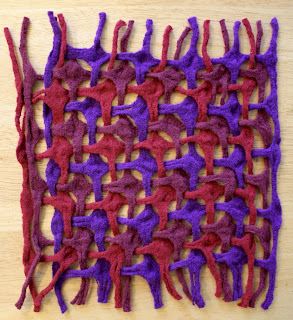 Wow, all the samples are beautiful, but the final one is indeed the piece de resistance (please read w/ a French accent). I really liked reading about your working process too. One of my art teachers once said that art can (and often should) be like science -- a process of deliberate investigation. He would have been very pleased with your sequence of trials here, I think.

Ruth, I so agree with your art teacher! It seems that many great painters experiment, analyze, test theories and apply a laser-like focus to their work. And the best weavers I know do the same! Also, I've found that many of them come from science backgrounds ;o)

Thank you, Doris! I really had to work to control my beat -- and the selvages. With three layers, one of my shuttles has to travel under one layer and then over another. Very tricky!