Summer Is the Time to Play... with Yarn 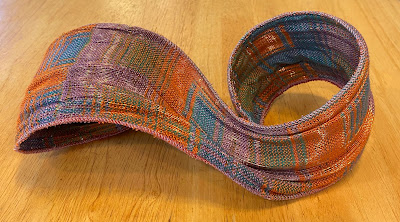 A friend of the late, great Kay Faulkner remembered how Kay would phone her and begin with the words, "I've been playing...."
My reaction was, if that's "playing," then I need to do more! But seriously: Creativity and play are related, if not joined at the hip. Allowing our mind to roam when we're making something -- or even walking away from the work altogether -- lets our imagination roam, without pressure. Taking a shower, going to sleep, daydreaming, lolling about in bed as we wake up -- or playing the violin, in the case of Einstein and the Theory of Relativity -- gives our subconscious the time and space to explore.
So I've been playing, as you can see in the photo above. The structure is four-color double weave, with 16/2 bamboo for the two warps and one of the wefts and 28-gauge wire as the other weft. It was definitely tough to weave with (and my selvages show it), but I think there's an idea in there. What if I wove yardage like this? Could it be a sculpture? Or what if I used wire in random picks in the weft, as Liz Williamson has done with her dimensional scarves and shawls? What if? Why not?
Maybe my subconscious can work on that. I'll let the weaving goddesses make the decisions. (Some days they're with me, some days they're not.)
I wove this sample en route to weaving a garment on the same warp, one that I hope becomes a dress or a mantle of some kind. But instead of using wire as one of the wefts, I used Gevolve S-twist linen crepe from Lunatic Fringe Yarns. Using this in double weave that has pockets (as Marian Stubenitsky describes the separate layers you sometimes find in four-color double weave), it crimps the fabric up nicely, creating a kind of natural stretch in the bodice, with no darts necessary. And if you switch out the active weft for an inactive weft (in this case, so that all the yarns are 16/2 bamboo), you can achieve gentle ruffles where the textured  fabric meets the flat fabric.
Here's a photo. 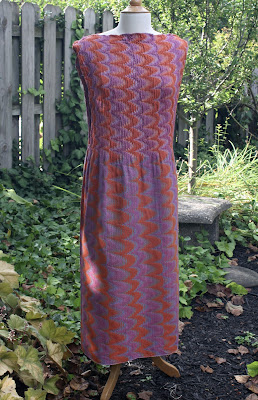 And here's a detail. 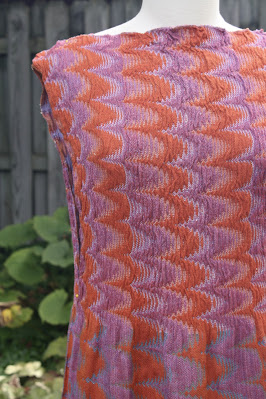 Finally, this is what the fabric looked like before washing, which allows the overtwist linen to draw the fabric in, creating vertical pleating on the opposite layer (that's woven with the inactive 16/bamboo in both warp and weft). 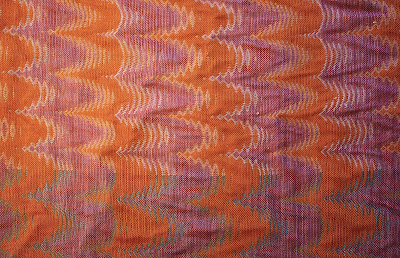 That dress would certainly work for someone more slender than I but maybe I could put gores in the side seams of the skirt... or maybe it's for an exhibit or a fashion show.... I'll just keep playing.
I've been messing about with beads also, ever since my friend Deborah Pope taught me how to make fabric beads. 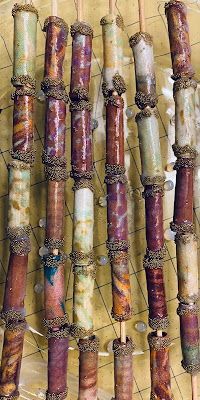 Not exactly sure what they're going to become; most likely a bracelet. I used to think that any finished project, however humble, is infinitely better than any unfinished piece, however beautiful. Now I'm not so sure. What's wrong with an unfinished work, with finding out that you don't want to follow that trail anymore?
Questions to ponder. Thanks for reading!
at August 24, 2022