More accurately, what's going on the loom? At this writing, I'm in the process of winding on a painted warp for a Jin design on 28 shafts (one of the versions of the pattern is shown above). Here's where I am at the moment, looking at the back of the loom. 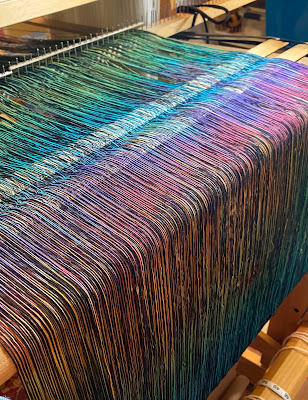 It's kind of an unusual warp: Has anybody heard of 24/3 unmercerized cotton -- with about 1% of black rayon thrown in? Who knew? It was a big cone in natural that I picked up at a guild sale. Figuring that the grist of 24/3 cotton was equivalent or close to that of 16/2 cotton, I wound a warp two ends at a time, alternating between the 24/3 unmercerized cotton in natural and a 16/2 unmercerized cotton in black.
When I went to paint the warp, I painted the entire warp at once, natural and black together. The dye colors don't affect the black at all, so you get a two-color painted warp, effectively, that you can thread for Echo. I appreciate efficiencies like that.
Back to the design. I love broken twills (most of us do, right?), a category that includes the old German designs known as Gebrochene. I've posted on this subject before, looking at a 16th-century pattern affectionately named "The Earl." Margie Thompson, an expert on historic textiles, shared it with our guild in a talk some time ago, and she was kind enough to send me the original draft, which is for 14 shafts. (For more on "The Earl" and Gebrochene twills, see my blog post of November 17, 2020.) 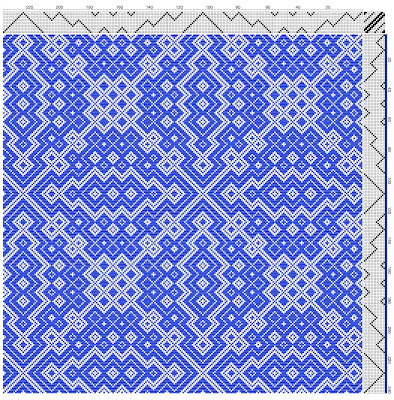 How did I get from the elegant, almost filigreed 14-shaft design above to the more primitive, tribal-looking 28-shaft design at the beginning of this post? It's a technique that I teach in my parallel-threading classes, using an Ms and Ws twill as a design line for Echo. I start designing by uploading the original Earl drawdown for 14 shafts in Fiberworks. (You need Fiberworks Silver for these functions.) Then, you click on the "Warp" dropdown menu and next you click on "Parallel Repeat" to Echo the original design line with a second threading 14 shafts above it.
Step 2: You see that the original Earl treadling is tromp as writ, for 14 treadles. This would work for a 28-shaft design, but it would give you squashed motifs, not very appealing. All I did (again, to achieve the design at the beginning of this post) was double the number of treadles for the entire treadling (so that treadle one becomes one and two, treadle two becomes three and four, treadle three becomes five and six, and so on). In other words, if the original treadling went from treadle 1 to 14 and down again in a point-twill pattern, I doubled the length of the pattern, so the treadles go from 1 to 28 and down again.
Step 3: Here's where it gets a bit more complicated. I started by designing Echo using a twill tieup for 28 shafts. This is what I got. Just a detail shot. I really don't like it at all. 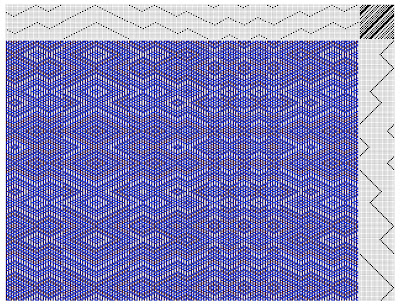 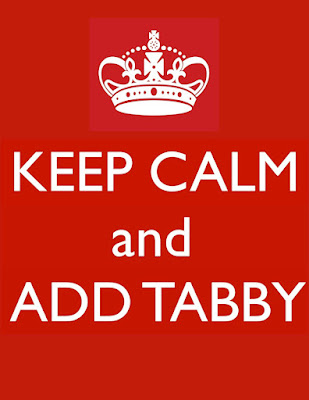 Of course, Echo has its charms -- but Jin also has a lot going for it: nice drape, one-shuttle weave, floats never longer than 3 in warp or weft, clear pattern definition, the ability to stretch out "squashed" designs, and the potential to play with the tieup to add a bit more color and interest, without risking long floats. That's what you see in the drawdown at the top of this post -- and also in the design below which uses another treadling but a similar tieup. 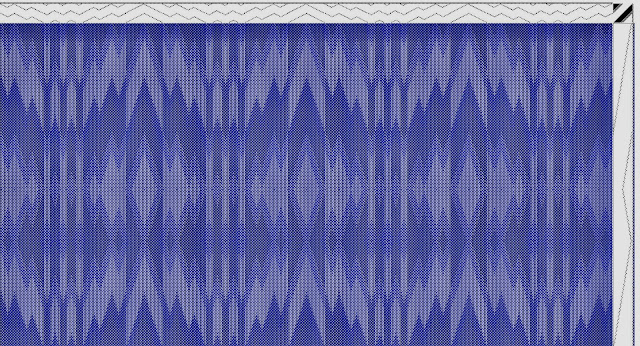 I like both designs, the one above and the one at the beginning of this post. What they share are tieups for what Bonnie Inouye calls "Decorated Jin." Below is what a classic Jin tieup looks like, with half the shafts raised and half down in an ascending-twill pattern, with tabby tiedowns in between: 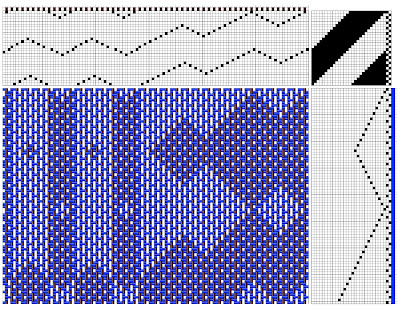 You'll see that the motifs above are simple and distinct, basically two colors, light and dark. This drawdown shows only a detail so that you can see the tieup more easily. Now let's look at a tieup for Decorated Jin. 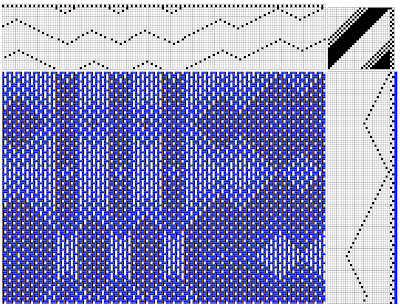 Here, there are different colors and the motifs have more interest. The difference is that I've broken up the 14 up/14 down ascending-twill tieup, adding a bit of plain weave. Now, I see four different shades: pale blue, medium blue, dark rust/blue, and royal blue. It's all in the details!
I'm going to sample at least two Decorated Jin designs and, fingers crossed, find at least one I really like. But first, of course, I have to finish dressing my loom....
Thanks for reading!
at September 18, 2022

Thank you for your kind words. In all fairness, Kathi Grupp, advertising manager of HGA and moderator for Textiles and Tea, coined that phrase in a workshop I taught in Atlanta -- and I have used it ever since!