Showing posts from February, 2017
Show all

More from the Warp That Keeps on Giving: Turned Taqueté 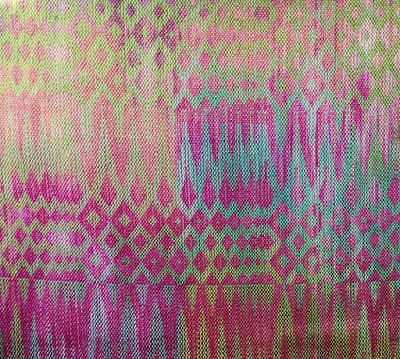 At this point, the problem is making a decision -- ANY decision, for crying out loud! I have been able to weave so many patterns on this warp -- an extended parallel threading -- that it's hard to choose which one I like the best. So far, I have woven maybe maybe 10 different patterns, using two different tie-ups and lots of different treadlings. I've finally decided on the two in the photo above. (Not one, but two -- but that's OK, because I like the way they work together.) Both patterns are treadled as Turned Taqueté, which I've blogged about extensively because it's such a beautiful structure. The diamond-shaped pattern is created with a simple advancing point twill treadling. Here's how it looks close up: And here's the drawdown: For the other pattern, I created a networked treadling based on an initial of 2. Here's the drawdown for that. So now I have about 8 yards left to weave, which is hopefully enough to make a garment. L
Post a Comment
Click here to see photos and read more....
More posts